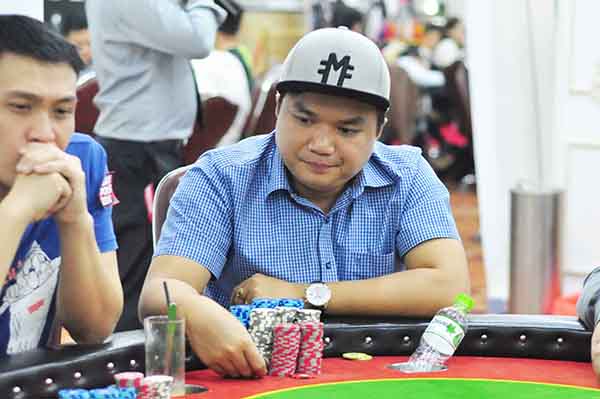 
The Asian Poker Tour, one of the poker giants in the Asian region, began its 2019 season with the APT Vietnam Kickoff at the Pro Poker Club in Ho Chi Minh City yesterday, the 9th January. The series is prestigious enough to attract top talent from across the region as well as India. Many Indian regulars have already confirmed their presence there.

The first day of the series saw two events being hosted, Event #1 Monster Stack 1 and the Super High Rollers. Monster Stack 1, the first event of the series, has a buy-in of VND 11 million (~INR 33,757) and attracted a total of 174 entries yesterday, but only 54 qualified for today, and it is already underway as we speak.Today, it began with the blinds at 2K/4K/4K (big blind ante) and only 33 players are left as we type this.

Local pro Tran Kim Dong (above) has amassed the largest stack with 390,000. He is one of Vietnam’s budding players and has a few respectable cashes in previous live recorded events. His biggest live earnings came from APL Vietnam DSO Main Event in November 2018, where he finished 2nd for $10,083.

Dong won two major hands, one going all-in pre-turn with Kd 10c and hitting a full house on the turn against his opponent’s Kh Qc and the second was just three hands before the day’s end, where he eliminated Nguyen Huu Tuan with Ace-Queen over his opponent’s Ace-Ten.

India’s first WSOP Bracelet winner Aditya Sushant was also seen running in the Monster Stack and has qualified for Day 2. Some other recognizable names who qualified for Day 2 include Iori Yogo and Lim Yohwan. Yogo hails from Nagoya, Japan and has a over $1.2 million in total live cashes to his name. He recently shipped the APT Finale Manila Championships Event last month, following which, we had an exclusive interview with him. You can read the interview here.

The Super High Rollers also went on simultaneously with the Monster Stack on the first day of APT Vietnam Kickoff and drew 24 players, being a high-stakes event with a VND 107,500,000 (~INR 3.29 Lakhs) buy-in. Keep reading GutshotMagazine.com for more such APT updates as well as general poker news from around the world.