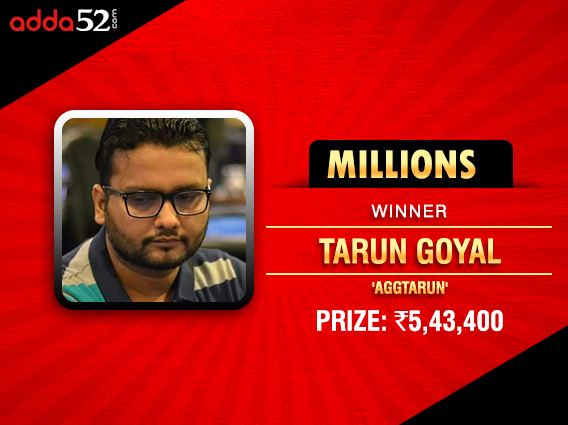 When you are selected to represent or endorse a brand or a company, it only makes sense if you do your best for them. Chris Gayle was signed as brand ambassador of Adda52 a few months back and since then, he has done plenty for the company on social media and also through physical interactions with the media, as the case in the recent Diwali Poker Party held in Mumbai.

These companies hire Team Pros to represent them in online and poker tournaments and Adda52 seems to be doing it right on that front as well. One of their Pros is Tarun Goyal aka ‘aggtarun’ and this guy is always in the money finishes in top tournaments, while last night, he decided to kick it up a notch and ship a major tournament too.

Just around three nights back, it was business as usual for Goyal as he played in the Adda52 Whale and finished second to Arjanveer Chadha after a very long grind. Last night, he ran deep again but he didn’t want to settle for another runner-up finish, outlasting everyone else to win the Adda52 Millions INR 20 lakh GTD, a tournament that attracts India’s best players every Sunday.

The tournament has a steep buy-in of INR 11,000 and yesterday, the guarantee was beaten slightly with a field of 209 entries (141 players + 68 re-entries) joining the popular tournament. From them, 27 players were eventually paid out a minimum cash prize of INR 12,540.

The tournament which began at 8pm last night ended over 9 hours later, with Goyal being crowned champion at 5:22am this morning. He was very handsomely rewarded for this effort, winning the massive top prize of INR 5,43,400. No prizes for guessing who Goyal’s last victim of the night was – Arjanveer Chadha aka ‘arjan30’!

Like we mentioned, Chadha beat Goyal just a couple of nights back and this tournament turned out to be sweet revenge for Goyal, as Chadha had to settle for INR 3,44,850 for finishing second. These two players are always top contenders, and this may not be the last time they face off in a heads-up battle online.

When Gutshot caught up with Goyal after the victory, he said, “The Adda52 Millions was a really good experience. It feels satisfying to win this heads up. A few nights back, I played it really badly, but I am glad I turned it around this time. Also, it was a very tough Final Table.”

Some more Adda52 regulars made deep runs on the night, including Ravindra Arikeri aka ‘Vickyarikeri’ who ended in 4th place for INR 2+ lakh in prize money, Ashish Ahuja aka ‘rocky3705’ who rounded up the 6-figure pay-outs, finishing 6th for INR 1.07 lakh, Shravan Chhabria aka ‘sweatmyass13’ (9th), and of course, Aditya Sushant aka ‘A_Sushant’ (15th).