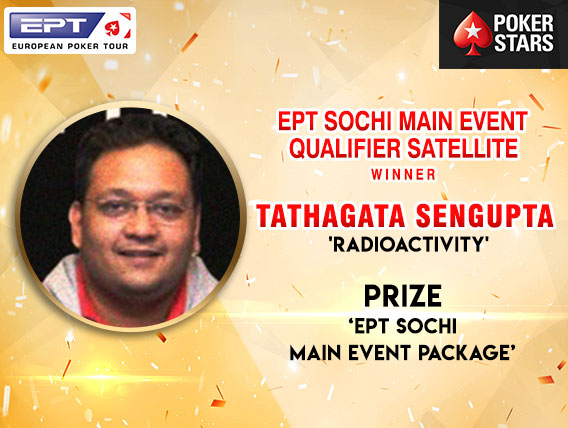 
One of India’s newest entrants in the poker scene is also the world’s leading poker brand – PokerStars. They launched their Indian operations in March last year and immediately partnered with Global Player League (GPL) India. They have hosted exciting series like Diwali Rush and Winter Series since its inauguration which have turned out to be some of the popular events of 2018, enjoying positive reactions from the community.

PokerStars also owns and operates the prestigious European Poker Tour (EPT). They recently announced the EPT Barcelona to take place in August this year. Along with that, EPT Sochi is going to take place before the Barcelona event, between 20-29 March 2019 and PokerStars India are conducting multiple satellites and qualifiers for it.

Acclaimed live and online grinder Tathagata Sengupta won the elusive all-expenses paid package to EPT Sochi Main Event in a satellite hosted on PokerStars India. He was playing the EPT Sochi NLHE ME Qualifier Satty under ‘RadioActivity’ for a second time. He entered the Satty yesterday in late registration period and fought his way to the top.

In the final two tables, Sengupta lost a big pot and subsequently had the shortest stack but persevered enough with just 9 blinds to see the summit. In heads-up, he was pitted against Pranay Chawla aka ‘AankhDikhatahai’ and entered the battle with 3.5:1 chip lead. The final hand saw him packing Sixes against Chawla’s Tens. It was a pre-flop all-in situation and the board produced a 6 on the river, enabling Sengupta to ship the Satty and the package.

Sengupta won the EPT Sochi Package which includes an entry to the EPT Sochi Main Event plus free airfare and hotel stay at the Sochi Marriott Krasnaya Polyana and INR 40k for side expenses. “I am really excited and am looking forward to my first international poker tour. To be honest, once the daze of victory had subsided the next morning, I really got thinking and realised that only by posting a good score in Sochi will I actually be able to make this profitable in a real sense.”

Keep reading GutshotMagazine.com for more Indian/International tournament coverage as well as for your daily dose of poker news from around the world.