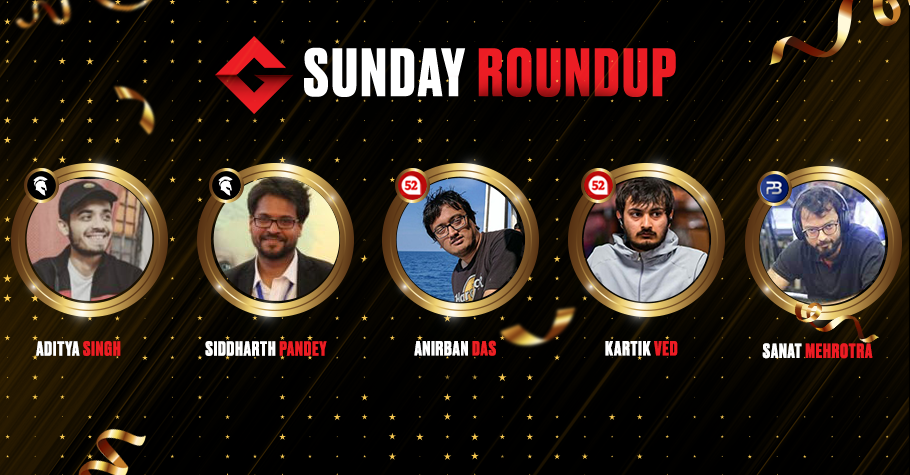 Sunday Round Up: Mehrotra, Ved, Das & Others Had A Dream Run In Online Poker


Sunday is a fun filled day and for poker players it is extra special. Most poker platforms conduct high-value tournaments and all the top pros from India grind hard on Sunday. With super high guarantees in place, newbies or pros, all of them head to the virtual felts of poker platforms. Let’s do a recap on the action that unfolded on these online poker platforms.

PokerBaazi’s Superstack tournament was one of the high-value events that took place on Sunday. The ₹5,500 buy-in tournament ran for a very long time as it started at 7 PM yesterday and went on till 3 AM. After this intensive grind, among the 517 total entries, Sanat Mehrotra aka ‘mehro2511’ shipped the tournament and won ₹5,02,000 in prize money. Mehrotra was followed by Harshad Barve aka ‘omglukbox’ who took home ₹3,52,000.

The top 63 players were paid a min-cash of ₹9,564 in this tournament. The advertised guarantee of ₹20 Lakh was crushed and an even bigger prize pool of ₹25,85,000 was formed.

The Sunday Superstack on Spartan Poker was a ₹11,000 buy-in tournament. The event had 520 entries in total and the top 47 players were paid a min-cash ₹29,640. This tournament was won by Aditya Singh aka ‘konstantinn’ who took home a massive ₹9,40,957 in prize money. The runner-up in this tournament was Varun Gulati aka ‘vg007’ who received a pay cheque of ₹7,16,282.

The advertised guarantee of this tournament was ₹42 Lakh but it was crushed massively and a bigger prize pool of ₹52,00,000 was formed.

If you’re a fan of Money Heist on Netflix, then this tournament on Spartan Poker must have surely caught your eye. This event had 371 entries in total and the top 39 players were paid a min-cash of ₹7,679. This ₹3,300 buy-in tournament was shipped by Siddharth Pandey aka ‘champ-ak’ who cashed ₹2,23,156. Pandey was closely followed by Sahil Mahboobani aka ‘Captain Falcon’ who won ₹1,48,362.

The advertised guarantee of this tournament was ₹8 Lakh but it was crushed and an even bigger prize pool of ₹11,13,000 was formed.

The Colossus tournament on Adda52 stands true to its name as it had a massive guarantee of ₹70,00,000 Lakh on offer. This prize pool was crushed and an even bigger prize pool of ₹85,07,498 was formed. This ₹55,000 buy-in tournament had 166 entries in total and Anirban Das aka  ‘AjGar5’  traversed to the top and clinched the winning title. He shipped the tournament and took home a whopping ₹19,66,407 in prize money. The runner-up was Mithun Mahesh aka ‘Themiths’ who also thickened his bankroll with ₹14,55,435.

Deepstack Madness on Adda52 was a ₹20 Lakh GTD tournament. The initial guarantee was crushed and the final prize pool stood at ₹24,12,000. This ₹4,400 buy-in tournament was shipped by poker pro Kartik Ved aka ‘Pegasus1505.’ Ved took home ₹5,05,515 in prize money. The runner-up of this tournament was Pratibh Saluja aka ‘MrGTO’ who cashed ₹3,91,749.

PokerSaint’s Monster Madness tournament had 349 entries in total and the top 65 players were paid a min-cash of ₹4,842. This tournament was won by an anonymous player ‘PlzJustDie’ who took home ₹1,49,017 in prize money. This player was followed by yet another mystery player ‘runBADfeelGOOD’ who cashed ₹1,26,404.