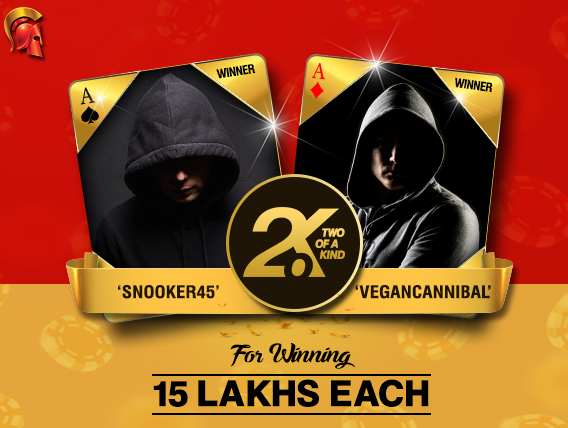 The Two of a Kind (2oK) is one of India’s most unique online poker tournament offerings, hosted on The Spartan Poker once a month, usually the first Sunday of the month. Yesterday was the first Sunday of November and apart from the usual Sunday grind tournaments on Spartan, November’s 2oK was also a part of the line-up.

The USP of this tournament is that there’s not differentiation between the first and second finishers. The minute the tournament reaches 2-way play, action is halted, and both winners take away massive prizes of INR 15 lakh each. With a buy-in of INR 5,500, this was the first rake-free 2oK tournament and it was a massive success.

An enormous field of 1,073 entries registered to the tournament and this created a whopping prize pool of INR 59.01 lakh, which was eventually distributed among the top 70 places with a minimum cash prize of INR 10,623. However, each and every person in this field would’ve been eyeing the top two spots.

Eventually, it was ‘Snooker45’ and ‘vegancannibal’ who were the last men standing, after a 10-hour 46-minute grind which ended at 4:46am this morning. At this time, the tournament was at Level #59 with the blinds at 35,000/70,000 – 7,000. It all came to an end when Arjun Arora aka ‘FishPlay99’ was eliminated in 3rd place after a pre-flop all-in with Snooker45, where Kings and Queens beat Arora’s pair of Queens.

Arora had to thus settle for the third-place prize of INR 6,49,165. While this is still a huge bankroll addition for any player, he would be a tad bit disappointed after having missed the massive prize jump. Play came to an end and Snooker45 and vegancannibal were credited with INR 15 lakh each.

A total of 7 players took away 6-figure pay-checks and another well-known poker personality who made a deep run was Guneet Kwatra aka ‘guntz’ who finished in 5th place for INR 2,36,060. Both winners wished to keep their identities anonymous after these massive wins, but we’re expecting to hear about more victories from them soon. To know more, stay tuned to GutshotMagazine.com.