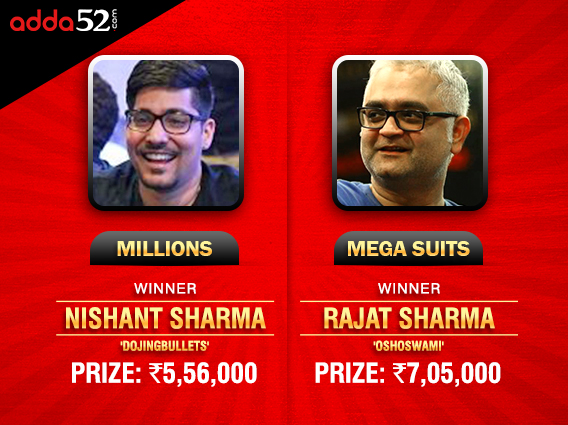 
As is regular on any given Sunday, poker enthusiasts all sign up for the exciting events on various platforms in the country. Sunday being a holiday, many players who are working on weekdays get a chance to indulge in their favourite game the whole day and look to ship an event or two.

This is what happened on Adda52 yesterday. The platform hosted Millions and Mega Suits yesterday. Poker enthusiasts all flocked to the two tournaments in crazy numbers and ensured a successful Sunday for Adda52, as is always the case on the site. Yesterday was a day of the Sharmas on Adda52, as Rajat Sharma and Nishant Sharma won both the feature tournaments.

The first feature tournament on Adda52 yesterday was Mega Suits which started at 5pm last evening. The format was 8-max and the buy-in of the event was fixed at INR 5,500. It attracted a player field with the bests from the community, which made the grind even tougher.

Rajat Sharma is a well-known player in the circuit. His online record is impressive. Among his recent wins, he won the Mega Stack on Spartan, earning a cool INR 2.538 Lakhs there. He has now added another awesome title from Adda52 into his already filled basket and will be hoping to add a few more in the coming future.

Adda52 Millions began at 8 pm after Mega Suits and it attracted a decent turnout too, with big names featuring in the field. The field consisted of the top pros in the country and that made the competition even tougher. The buy-in of INR 11,000 was coughed in by the field individually.

Nishant Sharma won the tournament and earned INR 5,56,000 as 1st place cash prize. Sharma loves to play live and was just in APT Vietnam Kickoff too. A known and established player, he made the record of best Indian finish in WSOP ME, cashing at 34th place for a massive pay-check of INR 1.58 Crores, and beating Aditya Agarwal’s 71st place finish earlier.

This instantly made worldwide news and brought Sharma into the limelight. He has played in different places like Macau, Las Vegas and of course the poker capital of india – Goa – and cashed as well. Yesterday’s win on Adda52 is a pretty decent addition to his brimming bankroll, and he’ll be hoping to make some big wins using the amount.