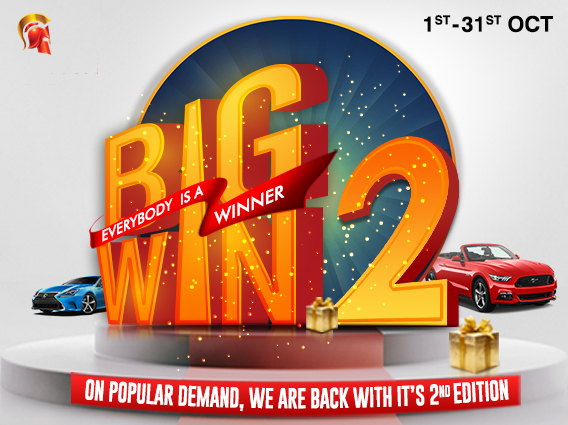 The Indian poker fraternity was rejoicing at the start of the month of September with The Spartan Poker launching an amazing promotion called BigWin where players could redeem prizes depending on the number of VIP points they generate throughout the month. Basically, everyone ha the chance to win big!

By the end of the month, hundreds of players took away big prizes by doing what they do everyday – play poker. The biggest winners of the month were Rishab Jain aka ‘Titumama’ and Dhruvin Kothari aka ‘singhamreturns’, with both these pros claiming the top prize of a Mercedes Benz CLA (200 CDI style) each.

With these prizes being claimed well before the month could end, Spartan decided to kick it up a notch, giving players massive rake back and awarding much bigger and better prizes in BigWin2, which will run through the month of October. Play poker between 1-31 Oct, earn VIP points and take-home massive prizes this month.

There was a lot of player demands and Spartan went on to match those demands, offering a whole new range of prizes including a stunning Ford Mustang, a Lexus ES, a Land Rover Evoque, a Ducati Diavel and plenty more. The Mustang can be redeemed with 7 lakh VIP points and players have already begun working towards it, with the promotion having begun on 1st October. Players can also redeem multiple prizes.

2.o.K. – With a buy-in of INR 5,500, this tournament gives not one but two winners the chance to take away top honours. The top two winners will each take away a mega prize of INR 15 lakh, with the tournament ending once it reaches 2-way play. This will be played out on 7th October 2018.

Millionaire – Scheduled for the second Sunday of the month, this has a buy-in of INR 7,700 and a whopping guaranteed prize pool of INR 1 crore. India’s top tournament will be played on 14th October this month and will also be the Main Event of the upcoming SSS series.

5 for 5 – Like the 2.o.K, this tournament is also not played out till the end. Play stops when we reach the final 5 players, with each player guaranteed a prize of INR 5 lakh. This is scheduled for 21st October and has a buy-in of INR 5,500.

The Little Big Series (LBS) is a series where players can buy-in small and win big. On the other hand, the Spartan Super Series (SSS) sees some of the biggest tournaments in the industry. The SSS is scheduled between 8-14 October while LBS will take place later in the month.