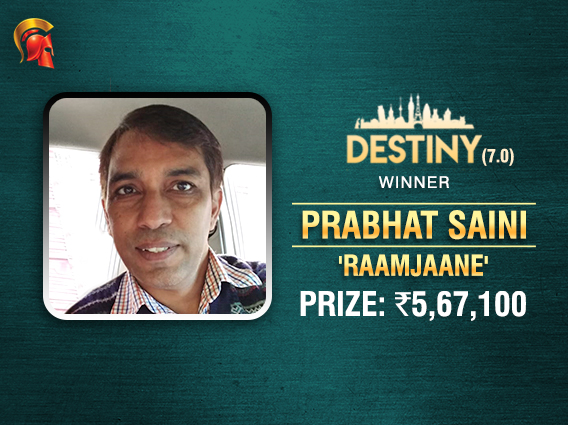 
One of the gems of The Spartan Poker’s line-up of tournaments is the Destiny, which is in its 7th edition currently. The unique feature of the tournament is that 10 different Destiny winners will get to play in the Destiny 7.0 Finale on 3rd February 2019, where the winner will be awarded with a juicy INR 10 Lakhs package trip to Europe.

Last night’s Destiny INR 20 Lakhs GTD on Spartan was an intense event that attracted a lot of players from across the country. The playing field came to a total of 261 entries (including 72 re-entries). The buy-in of INR 5,500 was coughed up individually and this crushed the original guarantee by an additional INR 1,40,000.

After an extremely long grind of over 9 hours, the tournament was shipped by Prabhat Saini aka ‘RaamJaane’ for a huge 1st place cash prize of INR 5,67,100. He beat another regular Pranav Bang aka ‘CalvinKlein’, who had to settle for INR 3,53,100 as the runner-up cash prize.

The final hand of heads-up was played at Level 55 with 25,000/50,000/5,000 (ante) and it was an interesting tussle. Saini with more than 5:1 chip lead shoved all-in with his 5h Ac. Bang called, the board came to 5d 8s 8d 3h 6s and Saini instantly took the title and the 1st place money with his two pair beating Bang’s Td Ad, which missed everything.

Saini has seen a significant number of cashes in past tournaments, online as well as live. He had his first recorded live cash out way back in 2010, finishing runner-up in India Poker Series (IPS) Chapter 2, Goa for ~INR 6.15 Lakhs, which is his biggest live win till date. He has then gone on to earn considerably in later IPS chapters.

We contacted him for his reaction after the win on Spartan and he was evidently very happy with the accomplishment and said, “It’s a great feeling to reach to the top. I ran pure for most of the tournament and gave suck-outs on couple of occasions when needed.”

Keep reading GutshotMagazine.com for more tournament updates, announcements, promotional news as well as general poker news from around the world.