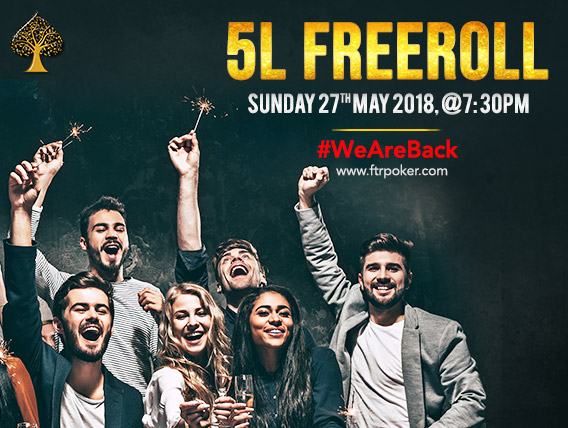 The summer is heading for a scorcher and to beat the heat FTRPoker.com has come up with one heck of a cool promotion. The site has announced an INR 5 Lakh Guaranteed Freeroll coming up on Sunday, 27 May at 7:30 pm. Yes! You read it right! This is a golden chance for players to build a fantastic bankroll for absolutely free!

It was only recently that it was announced that FTR Poker was acquired by The Spartan Poker and this freeroll looks like it will be one of many offerings in the pipeline by the new management. FTR Poker has been around since 2016 and has a growing player base which has been participating in well-known tournaments like the Big Bang and the Money Tree Series among others.

Everyone loves freeroll tournaments. It’s a great way especially for beginners because you can build a starting bankroll for nothing. There have been plenty of grinders who have started with zero and relentlessly ground out freerolls going onto making high six-figure scores on the back of their freerolls bankrolls. FTR Poker also features several high-value tournaments every day of the week which feature intermediate level buy-ins and terrific guaranteed prizes. And all of this can begin with little to no investment. But it all starts with a bankroll no matter how small.

So what are you waiting for? Sign up today on FTR Poker and play the 5L GTD Freeroll to start building your without spending a rupee! Good luck at the tables!