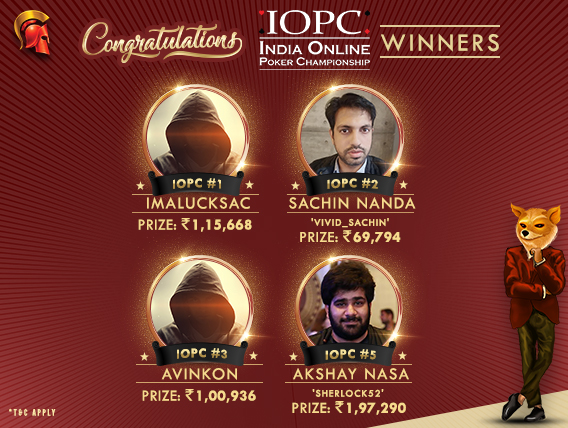 This event saw the guarantee crushed by a fresh prize pool of INR 10,90,000 for a buy-in of INR 2,200. Akshay Nasa emerged victorious after firing seven bullets to bag the 1st place cash prize of INR 1,97,290, beating 545 total entries (including 274 re-entries). He played almost seven and a half hours in the tournament and beat ‘flash’ in heads-up battle. Nasa is also in Vietnam right now, playing in the APT Vietnam Kickoff.

Nasa’s online and live record is phenomenal. Among his recent wins include the victory in Adda52’s Mega Suits for INR 7.2 Lakhs. He has accumulated plenty of cashes from past tournaments, live as well as online, and his record looks like a shipping yard, featuring some staggering titles won on various platforms. He has a few live cashes too. His major live win came in August last year when he finished runner-up in the APPT Manila National for $53,197. This welcome win will add another decent pay-check to this bankroll.

This event was the first one for the day and attracted a huge field of 663 entries for a buy-in of INR 550. Ultimately, the prize pool created was INR 6,48,000. Top 90 places were paid in this with a minimum cash prize of INR 1,846. The player to emerge victorious and the first IOPC title winner was ‘imalucksac’.

He beat the well-known young grinder Nadeem Basha aka ‘pokerbill’ in heads-up to bag INR 1,15,668 as the 1st place cash prize. Basha also took home a good amount of INR 83,268. The final hand saw the eventual champion ‘imalucksac’ go all-in pre-flop with Nines. Basha made the call with As Qh and the board came to 4c 7h 3h 3s 9s. ‘imalucksac’ shipped the event with a full house beating Basha’s 3-pair.

The second event was also an NLHE but with a lesser buy-in of INR 440. The event drew 512 entries making the prize pool come to INR 3,85,600. Top 72 positions were paid from the prize pool and the player to top that was Sachin Nanda aka ‘vivid _sachin’. He took home INR 69,794 for his victory, beating ‘Immmortal killer’ in heads-up.

The event’s final hand also saw a pre-flop all-in by the eventual champion, Nanda. He was with Ah 7c and his opponent with 3d 3s, who later made the call. The board came to Js 9h Kh 2s 7h and Nanda instantly bagged the title with his higher pair of Sevens beating a pair of Threes.

We talked to Nanda after his win and he said, “It was a good turnout of players and the tournament gave good value for money at INR 440 entry-fee. The tournament’s structure was nice however I think deal on Final Table should be enabled. Overall I had good experience playing with a competitive field.”

This event drew 398 entries for a buy-in of INR 880. The prize pool came to INR 5,45,600, surpassing the original guarantee. Top 54 places were paid, out of which, the champion was ‘avinkon’, taking home a wholesome INR 1,00,936 as 1st place prize. He beat the well-known Nishant Sharma aka ‘FunkyouFTW1’ in heads-up to bag his title. Sharma, who made a record Indian finish at 2018 WSOP, took home INR 72,838 in the IOPC and is currently in Vietnam and has progressed to Day 2 of APT Kickoff Main Event.

All the events of the Day 1 of IOPC shattered their respective guarantees and this was expected, given the enormous glamour and prestige associated with the series. Stay tuned to GutshotMagazine.com for first IOPC updates and results as well as general poker news from around the world.