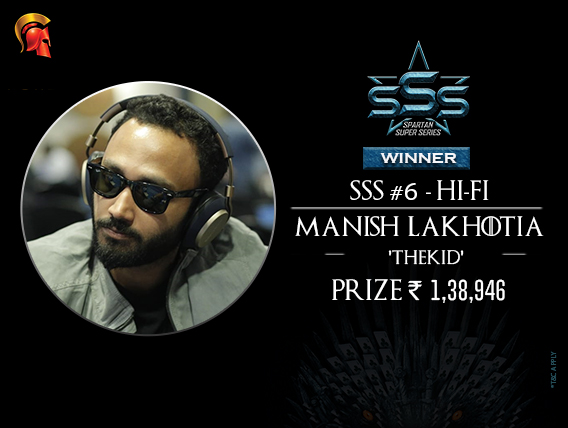 
April’s Spartan Super Series (SSS) began with a total of 6 events, among which the feature tournament Destiny (9th edition) was the biggest with INR 25 Lakhs GTD. The series will play till 14th April 2019, a period of 5 days with total INR 3 Crores in guarantee. Here’s a round-up of the tournaments:

The series began on a humble note with an INR 2 Lakhs GTD NLHE event. A total of 192 unique players signed up for the tournament, all chipping in the INR 440 buy-in amount. The tournament was hosted with the top 27 placed being paid.

The player to ship the tournament was ‘iwillbluff’ who took home INR 59,450. He/she beat Venkatesh Mukundan aka ‘Borissss’ in heads-up to bag his title. The runner-up was last month’s SSS title winner. He eventually settled for INR 40,125 as the runner-up cash prize.

The second one in the list for Day 1 attracted 171 unique players for a buy-in of INR 880. The field individually chipped in the amount and crossed the guarantee too. Topping the field was ‘bazzingaa’ who took home INR 63,957 as the first-place cash prize. The winner beat ‘umruhmlich’ in heads-up to bag the title and the latter earned INR 42,061 at 2nd place.

‘Veer’ pocketed INR 42,300 by taking home the SSS #3 title. He beat a field of 174 unique players to ship the INR 550 buy-in tournament. His opponent in heads-up was ‘radda’ who settled for INR 28,840 as the runner-up cash prize. In the last hand, which was a pre-flop all-in situation, Veer bagged the title with his Queens over high-card King, having already accumulated a big stack leading up to the winning hand.

‘MandirYahinBanayenge’ beat ‘Immortal killerr’ to earn the title. He/she finished the tournament with INR 7,35,800 Lakhs richer. The player also earned a seat into the Destiny 9.0 SNG Finale and this time, if he wins, he will be earning INR 5 Lakhs. The runner-up and the 3rd place finisher will earn INR 3 Lakhs and INR 2 Lakhs each respectively.

This was the last tournament of the day, after SSS #5 PLO HR won by Nishant Sharma. The Hi-Fi attracted a total of 462 entries (including 58 re-entries and 179 re-buys) for INR 1,650 buy-in. The top 39 places were paid for a min-cash of INR 4,781 and the player to ship the tournament was Manish Lakhotia aka ‘thekid’.

Lakhotia, a regular online player, earned INR 1,38,946 after beating ‘Ashishneverlie’ in heads-up with Queens and Sixes over Sixes and Fives in a pre-flop all-in scenario. The latter earned INR 92,376 as the runner-up cash prize. Lakhotia, already a regular player, has won feature titles like PokerBaazi Endeavour in the past and the Electra on Spartan. He’ll see a nice amount being added to his bankroll and will hope to continue this trend throughout the series as well.

SSS Day 2 has already begun on Spartan. The day will be host to 5 events out of which the SHR 45 Lakhs GTD is the biggest. A Head Hunter (Bounty format) event will also be hosted during the day so stay tuned to GutshotMagazine.com know these results and other poker news from around the world.