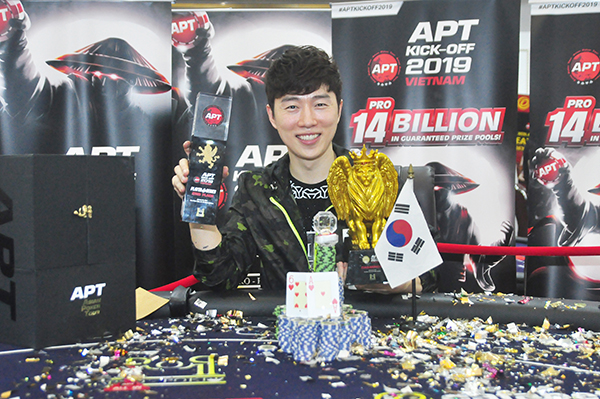 
The second biggest event after the Main Event in the prestigious 2019 Asian Poker Tour (APT) Vietnam Kickoff series was the Championships Event. The tournament attracted a total of 248 entries from two starting flights and a few levels on Day 2.

As we reported earlier, Baadshah Gaming’s Madhav Gupta (15th), Adda52 Pro Kunal Patni (16th) and Romit Advani (18th) were three Indians to cash in the Championships event. They all played phenomenally after having some of the shortest stacks entering the day and made their country proud.

The player to ship the Championships Event was South Korea’s Lim Yohwan who sized the title and the VND 2,040,542,000 (~INR 62.62 Lakhs) as 1st place cash prize. This makes Yohwan’s second APT Championships win and also his best live cash he ever earned. The first APT Championships he shipped was at APT Manila in September last year for INR 37.22 Lakhs. He even came 2nd in the Player of the Series at the APT Manila Finale in December too.

Yohwan is a highly accomplished player in the Asia-Pacific region is ranked 10th in South Korea’s All Time Money List. He began playing live somewhere around 2014 and has plenty of cashes till now from around the region like Macau, Manila, Vietnam as well as the poker capital – Las Vegas. The Korean pro will be looking to make some awesome wins in the future using this amount, which is every winner’s dream.

Throughout the tournament and the final day, Bulgaria’s Slaven Popov was giving tough competition by playing some phenomenal poker. He single-handedly eliminated multiple players on the day and was looking like a winner already. In heads-up too, he began with 2:1 chip lead against Yohwan, but things took a turn from there.

Yohwan rose to nearly 2.5:1 in heads-up, but Popov soon claimed the lead again. It was a back-and-forth action between the two before Yohwan landed a double up with pocket Tens over pocket Nines. The action following saw Yohwan playing in full form. The 195th hand for the day was the final hand and Yohwan landed a nut flush on the board of Jh 5h Qh 2h 5h with Ah 6h against Ad 3h. Popov earned VND 1,360,361,000 (~INR 41.76 Lakhs) for his laudable runner-up finish.

This win earned Yohwan the 2nd place on the APT Player of the Series after Michael Kim Falcon, and the APT Kickoff ended on a successful note. You can read the entire 2019 APT Kickoff results on GutshotMagazine.com and for your daily dose of poker news from around the world.