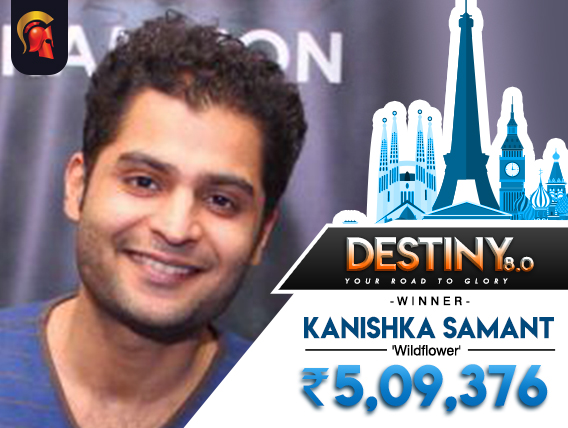 
Spartan Poker’s Destiny is an immensely popular tournament that also offers INR 10 Lakhs Europe package to the winner of the SnG Finale, which consists of all 10 winners. The series is in its 8th edition now (Destiny 8.0) and currently 8 tournaments have been played out, the latest one being yesterday’s. This edition’s SnG Finale will be hosted on 3rd April 2019 on the platform.

Destiny INR 20 Lakhs GTD started on Spartan last evening at 7.30 pm and the winner was declared at 3.31 am today morning when the last hand went into the books. The popular tournament gathered a large field of 431 entries (including 87 re-entries, 151 re-buys). A total of 40 places were paid for a min-cash of INR 12,930.

The player to overcome the tough field was regular online grinder and acclaimed community player Kanishka Samant aka ‘Wildflower’ who took home an amount of INR 5,09,376 as first-place cash prize. He made a heads-up deal with his opponent ‘LENIN88’ which saw him take the above amount and the runner-up grabbed INR 4,17,273 as his part of the ICM chop.

Samant is a well-established player in the Indian scene. He has played online as well as live since a long time. He is a strong presence on various online platforms including Spartan and has won various major tournaments. Recently, he won The Elite in January 2019 IOPC for an awesome cash of ~INR 12.74 Lakhs. He has even won Sunday SuperStack on Spartan previously.

Since it was a Destiny tournament, the field was filled with many regs and top talents from the country. The Final Table itself was a competitive affair. Anirban Das aka ‘pokernoob’ finished 7th for INR 60,340. Zarvan Tumboli aka ‘BolAuntyAuKya’ finished 8th for INR 53,875. India’s best WSOP Main Event finisher Nishant Sharma aka ‘FunkyouFTW1’ also made it in the money and finished at 9th for INR 45,255.

Keep reading GutshotMagazine.com for more such tournament updates, roundups, and for general poker news from around the world.