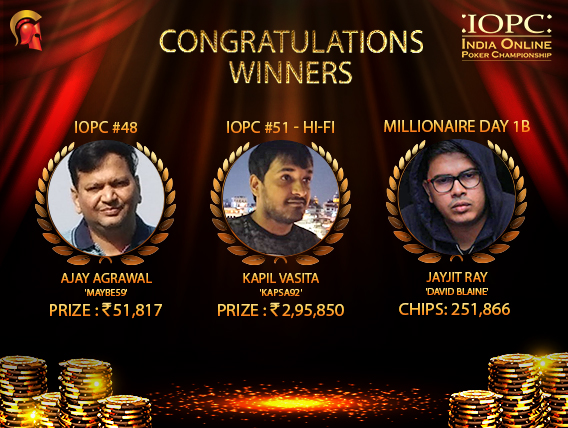 The biggest ever online poker tournament in the history of Spartan Poker began a couple of nights back with Millionaire INR 2 Crore GTD playing out its second starting flight as part of the India Online Poker Championship (IOPC) series which is currently underway. A total of 7 starting flights including one turbo flight will be played out and so far, the response has been pretty good!

Yesterday was IOPC Day 10 on Spartan and apart from 4 side events taking place, Millionaire 1B saw a healthy participation where Jayjit Ray emerged as chip leader, after already having won one major title in the series so far. Keep reading for a full summary of IOPC Day 10…

A field of 490 entries participated in the first tournament of the day and each of them paid the entry fee of INR 550. The beauty of the IOPC is that while it gives away huge prizes to the best in the business, it also allows new heroes to emerge. In this case, it was Ajay Agrawal aka ‘maybe59’ who shipped the tournament and made a decent bankroll addition of INR 51,817 in addition to taking home a prestigious IOPC title on Spartan Poker. 31 players were paid out INR 2,156 each, but none took away a bigger prize than Agrawal. The tournament ended when he beat ‘Shakerchi’ in heads-up, the latter winning INR 34,888 for his runner-up finish.

Another tournament with a small guarantee and relatively small buy-in of INR 770, and 409 entries took to the virtual felts on Spartan. Inspired by our favourite FRIENDS’ character, ‘JoeyTribbiani’ outlasted the field, emerged as the winner and pocketed the top prize of INR 63,415. It was not an easy journey for him though as there were a few tough players to get past including Ankur Aryan aka ‘showstopper89’ who had to settle for INR 42,801 and his second runner-up finish of the series, to add to one title as well. JoeyTribbiani called the pre-flop shove with 8s Ks and hit two more Eights on the flop and river to complete this victory!

This is Spartan’s Tuesday featured tournament and with a buy-in of INR 3,300, the competition was about to get slightly more intense. 819 entries participated and once again, the guarantee was crushed to create a new prize pool of INR 24.57 Lakh, which was then proportionately shared among the top 71 ranks, each being paid out a minimum of INR 9,336. ‘CrownUpJr’ would’ve been proud of his efforts last night as he beat a very well-known pro ‘biglooser007’ in heads-up to win this IOPC Mega Stack and add INR 4,74,201 to his poker bankroll.

Spartan Poker almost always wraps up proceedings with the Hi-Fi tournament and last night, it had a buy-in of INR 2,750 attached to it. Still, the guarantee was passed and with 610 entries joining, we had a new prize pool of INR 15.25 Lakh which was then distributed among the top 55 players (min-cash: INR 7,472). It would’ve been a nice mid-week morale booster for Kapil Vasita aka ‘kapsa92’ who managed to close out the tournament and add a decent amount of INR 2,95,850 to his online poker winnings. In heads-up, he beat Aditya Rathi aka ‘Gappuu’ who narrowly missed his second title of the ongoing IOPC, settling for INR 1,87,575.

Never before has the Millionaire had such a massive guarantee on Spartan and by the looks of it, they’re well on course to seeing the guarantee being broken as well. Including re-buys and re-entries, 335 entries each coughed up the INR 11,000 buy-in to play this prestigious tournament on Day 1B, the second of 7 starting flights, and INR 33.5 Lakh was added to the tournament prize pool last night. After the scheduled four hours of play, 50 survivors bagged their chips to return on Day 2, taking the total survivors count up to 139. Leading the chip counts from 1B is Jayjit Ray aka ‘David Blaine’, fresh off winning the IOPC Sunday SuperStack a few nights back. He bagged a stack of 251,866 chips and he’ll have a big advantage when he resumes on the final day of the series.

We’re all excited to know what happens in the last few days of the IOPC on Spartan Poker, so stay tuned to GutshotMagazine.com for all timely updates.