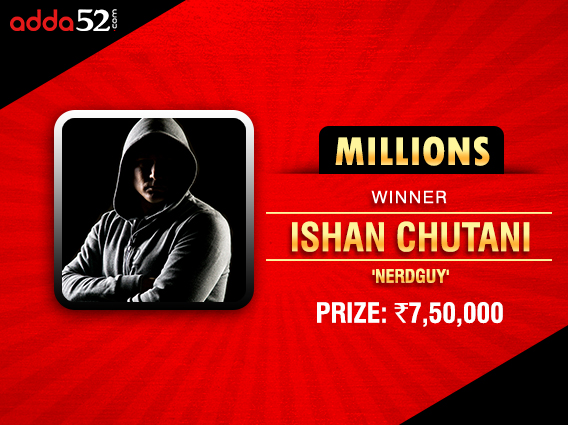 
Every weekend, poker players in India look forward to some of the biggest online tournaments, where they can play and win from huge prize pools. The Sunday grind is the best thing about the week for these Indian players, with all the top poker companies hosting high-guarantee tournaments on their platform.

As for Adda52, they host a couple of big tournaments every Sunday, namely the INR 10 Lakh Sunday Suits and the INR 20 Lakh GTD Adda52 Millions. You have to be one of the best in the business to win these tournaments and yesterday, Ishan Chutani aka ‘nerdguy’ proved that he is among the best.

Ishan is the younger brother of Sahil Chutani, who has been around the circuit since a while, playing both online and live poker, in India and internationally too. Ishan is relatively newer to the industry, but he is slowly making a name for himself, with quite a few deep runs on Adda52 of late.

He’s made several final tables in Adda52 featured tournaments and most recently, he shipped a Godfather 4.0 tournament on their platform, winning a massive prize of INR 6.12 lakh (to go with an entry to the Godfather SnG Finale) and notching up his first major win on Adda52.

Now, he emerged victorious in the INR 11,000 buy-in Adda52 Millions, beating a strong field of 200 entries (149 players + 51 re-entries) and taking away the first-place guaranteed prize of INR 7,50,000. He passed his best online score and is now a massive contender when playing in major tournaments such as this.

Interestingly, Chutani also finished runner-up in the last edition of the Millions, but he completed the victory this time around, beating Dhruv Gandhi aka ‘HolaVendee’ in heads-up, who settled for the runner-up prize of INR 3,45,000. In the final hand, Gandhi missed a straight and Chutani won with a pair of Kings. Eventually, the top 15 players received a minimum prize of INR 25,000 in this tournament and ‘prateek91’ finished 4th yesterday, after winning the Millions title last week.

Keep reading GutshotMagazine.com for more updates on the top poker tournaments in the country.