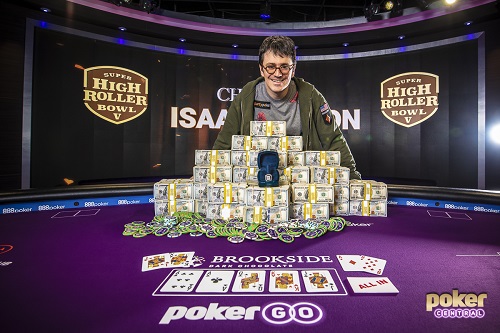 In its short history so far, each of the previous four seasons of the SHRB were held in the ARIA in Las Vegas towards the end of May, just before the World Series of Poker (WSOP) began. However, earlier this year, Poker Central confirmed that the tournament was shifted to December and it will take place in December every year from now. The tournament was live streamed on PokerGO. 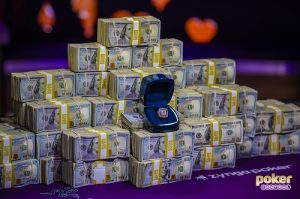 Here’s a list of all previous winners of the SHRB:

Now the fifth edition of the SHRB was scheduled between 17-19 December 2018 at the same venue, with the winner being announced just a few minutes back. 36 players registered to the high-stakes tournament, each paying a huge amount of $300,000 to enter, and the winner was none other than USA’s Isaac Haxton who walked away with a career-best victory of $3,672,000, taking his live poker winnings past $23.5 million.

Those who win the Super High Roller Bowl generally walk away with a career-best win, and this time was no different, with Haxton winning the biggest share of the $10.8 million prize pool. He ended the 3-day event at ARIA when he managed to outlast Alex Foxen in heads-up, who also took away a career-best prize of $2,160,000 for finishing second.

The high-value tournament kicked off a couple of days back and by the end of Day 1, Hollywood-figure turned poker player Rick Salomon (pictured below) led the final 27 players. The player was the 36th and final player to register and did well to end as the chip leader with 806k bagged up for the night. They played eight 60-minute levels and 2018 Poker Masters winner Ali Imsirovic was second in chips with a stack of 661k. 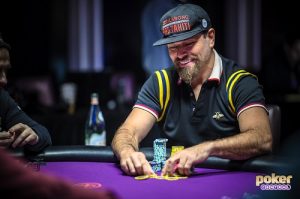 Among some of the best plays of the day was also Daniel Negreanu’s brilliant fold against Mikita Badziakouski, where Negreanu folded a nut straight against the latter’s full house. Clearly, it’s not for nothing that they call him one of the best. Take a look:

The intensity increased on Day 2 of the tournament yesterday, with the field narrowing down to the Final Table of just 7 players, and Haxton taking the lead with s stack of 2.4 million chips. It would’ve been a happy day for the players who survived as each of them entered the money and were guaranteed a prize of at least $540,000.

Haxton continued his dominance right through the final day as the action boiled down to just him and Foxen in heads-up. Some really good players cashed out along the way, including Imsirovic who took away the first cash prize, and UK’s Stephen Chidwick who ends a brilliant year, finishing 4th for $1,512,000. Foxen actually began heads-up with the lead, all set to fight for that massive amount of $3.6 million for first-place, to go with the coveted Super High Roller Bowl ring. However, Haxton was slowly clipping away at his opponent, bringing all his experience into play. ending the heads-up session in a little over 30 minutes.

In the dramatic final hand, Haxton moved all-in pre-flop with Ks Jh and Foxen made the call with Ad 8d, the latter clearly ahead. The flop opened 6s As Qs and that further strengthened Foxen’s lead with an Ace-pair, but the Kh on the turn gave Haxton hope again, with K, J, 10 being his outs. Js opened on the river and it was all over, as Haxton was deemed the Super High Roller Bowl V Champion, winning with two pairs – Kings and Jacks.

Talking about the win, he said, “This is my biggest score ever and easily the best accomplishment. This is the highlight of my tournament career. I came in with nearly a quarter of the chips in play and had position on the other big stack, so I was feeling pretty confident. I felt like I was in a great spot coming into today, but obviously it’s still very lucky to come away with the win.”

For more updates on the biggest live poker tournaments from around the world, keep reading GutshotMagazine.com.