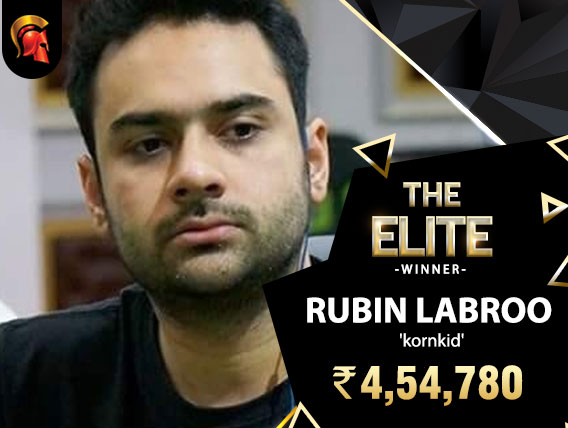 
A Friday on Spartan Poker usually sees top contenders from across the country filling in the field of the day’s feature tournament, The Elite INR 20 Lakhs GTD. And for a buy-in of INR 11,000, it makes sure to attract the well-established pros and regs of the community.

Claiming the top spot was regular online grinder Rubin Labroo aka ‘kornkid’. He took down the title and the top cash prize of INR 4,54,780 to go along with it. He beat ‘BuddyLove’ in heads-up to bag the victory on Spartan.

The last hand of the tournament was interesting. Labroo was fairly ahead with 2:1 chip lead leading up to the final hand. The flop of 5h Js Jd revealed where BuddyLove bet 54k with Ah Qh and Labroo called with Jc 4c, making trips. The turn of Jh gave Labroo a four-of-a-kind but he played it cool till the river of Qs, that was when he raised a big amount. BuddyLove, sure of his full house, called but couldn’t take down the pot and settled for INR 3,56,419 as second-place cash prize.

Labroo has made a name for himself over the years on virtual felts. Just in this month, he took down 9stacks biggest weekly offering Sunday Stacks.  He even finished runner-up to Abhinav Iyer in PokerBaazi BSS SuperStack this January. On live felts, he took down the DPT Kickoff back in 2017 which was his best and first recorded live cash of INR 6.8 Lakhs. Recently he finished ITM in DPT NLH Deep Dive.

Keep reading GutshotMagazine.com for more such tournament roundups, updates and for general poker news from around the world.