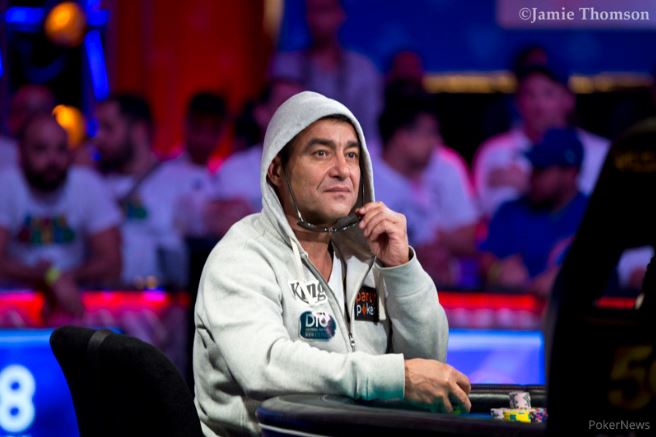 It’s the biggest stage in world poker as the 2019 World Series of Poker (WSOP) Main Event is all set to declare a new winner. However, play has stopped today on Day 9 and the final 3 players can enjoy one last night of sleep before they all become multi-millionaires in Las Vegas tomorrow!

Germany’s Hossein Ensan has now held the chip lead through all of Day 7, Day 8 and Day 9, as he inches closer towards glory at the 50th anniversary edition of the WSOP Main Event. The day began with 5 players and we’ve ended proceedings with 3 still in contention after Kevin Maahs and Garry Gates were eliminated earlier today.

Now, we have an Italian, Canadian and German who will battle it out tomorrow to become the new world poker champion. It’s Italy’s Dario Sammartino who is the most experienced of the lot with over $8 million in previous live earnings. He is the shortest stacked with 67 million chips but remember, he started Day 9 also as the shortest stack but still managed to get here.

Chip progression through Day 8 and 9: 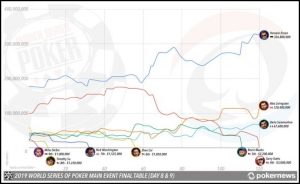 The winner’s name will go down in poker history and let’s not forget that he will also become richer by a massive amount of $10 million, so everything is on the line at the moment. Right now, Ensan has the advantage but anything can happen when these three return tomorrow.

Garry Gates was the last one to go today, hitting the rail in 4th place for $3,000,000 when his Sixes were up against Alex Livingston’s Queens and the 527TT saw the former’s dream coming to an end. When play resumes tomorrow, the next prize to be given out will be of $4 million to 3rd place.

Stay tuned to GutshotMagazine.com as we bring to you the latest updates from the Rio All Suites Casino and Hotel where a new world champion will be crowned tomorrow!