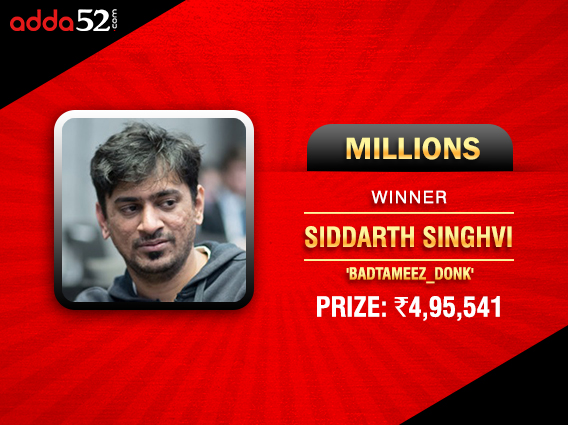 Adda52 is one of India’s biggest poker companies and their Adda52 Millions is similarly, one of India’s most popular weekly online poker offering, being contested every Sunday night and attracting some of the toughest fields week after week. Again, yesterday’s tournament turned out to be no different.

8pm was the scheduled start last evening and a total of 161 entries (110 players + 51 re-entries) coughed up the high buy-in of INR 11,000 to participate in the tournament. It went on for over 8 hours and ended at 4:12am this morning, with Siddarth Singhvi aka ‘badtameez_donk’ taking home the title.

Singhvi is a player who has plenty of poker achievements, especially in the online circuit. With titles across all major online platforms in India, Singhvi has taken a liking towards Adda52 of late, winning plenty of tournaments, the most recent ones being The Roar and the Whale 6-Max last month, while he also won October’s Ace Race 1 Leaderboard on Adda52.

The player’s winning streak now continues on Adda52, where he shipped the Adda52 Millions which is among some of his biggest cashes online, the largest being winning the 2oK on Spartan in June for a whopping prize of INR 15 lakh. Yesterday, he added another INR 4,95,541 to his poker bankroll following a heads-up deal in the Adda52 Millions. When Gutshot spoke to him, he said, “Glad to win a big Sunday event. I came very close in Mega Suits too. Happy with my overall consistency.”

Just the top 12 finishers were paid in this tournament (min-cash INR 35,000) and just before the money bubble approached, Singhvi was in the bottom half of the contenders, so he did extremely well to put himself back in contention, and eventually win the title after a deal with ‘sravanth49’, who won INR 4,84,459 for finishing second.

Also on the Final Table was Adda52 Team Pro Kunal Patni aka ‘KunalPatni’ who won INR 75,000 for finishing 7th, while Sumit Sapra aka ‘Hammer_Head’ finished 10th for INR 35,000. Keep reading GutshotMagazine.com for more updates on India’s best Sunday grind tournaments as well as updates from other poker tournaments from around the world.