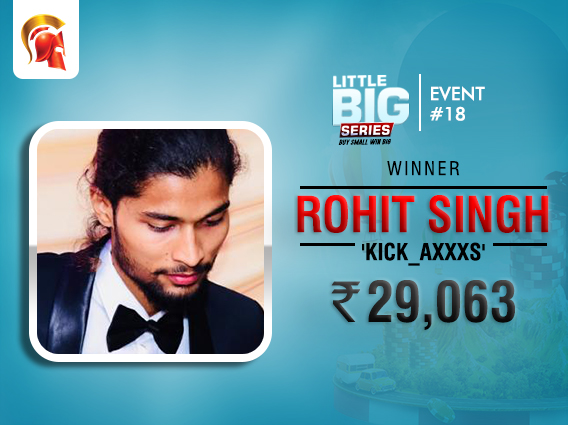 Another edition of the Little Big Series (LBS) has come to an end on The Spartan Poker and this time, a total of INR 19+ lakh was given away in guaranteed prizes during the series. Sunday was the final day of the series and along with the Main Event, five side events were scheduled for the day.

Here’s a look at what went down on LBS Day 4:

With a buy-in of INR 110, this was a nice start to the final day of the series, and the tournament attracted a total of 425 entries. The prize pool was eventually shared among the top 15 players with a min-cash of INR 950 and ultimately, ‘Psychonaut’ took down the tournament for the top prize of INR 14,000 after he beat ‘sungun’ in heads-up, who won INR 9,125. In the final hand, Psychonaut’s pair of Kings was better than his opponent’s pair of Tens.

Same advertised prize pool as the first tournament, but the second tournament had a slightly higher buy-in of INR 165, which attracted 259 entrants in all. 18 people shared this prize pool with a minimum prize of INR 800, and the player who won the biggest prize of them all was Kumar Gaurav aka ‘Gaurav691’, who shipped the tournament for INR 12,875. He beat ‘bubbletrouble’ in heads-up, who settled for the runner-up prize of INR 8,525.

Back to back wins it became for Kumar Gaurav, who, after shipping Event #14, also hit hard to win Event #15 as well. Here, he had to beat a bigger field of 292 entries with a buy-in of 330. Only the top 23 finishers shared the prize pool with a minimum cash of INR 900, but Gaurav was the biggest beneficiary, winning INR 20,700 for shipping the tournament. He beat ‘prinsofpoker’ in heads-up, who settled for INR 13,905, and that helped him get atop of the LBS Leaderboard as well.

‘Rahsam’ turned out to be the winner of what was the second last tournament of this edition of the LBS on Spartan. The tournament had a buy-in of INR 220 and 264 entries created the field from which, the top 12 were paid out a minimum prize of INR 1,800 each. Rahsam outlasted them all for a prize of INR 22,800 after beating ‘gauravv03’ in heads-up, who won INR 14,800.

The buy-in to the last tournament of the day and the series was INR 440 and a field of 255 entries registered, missing the guarantee slightly. Form this field, the top 23 players were paid out a min-cash of INR 1,450 but none was rewarded better than Rohit Singh aka ‘kick_axxxs’. He won his second title of the series, winning INR 29,063 after beating ‘difsripp’ in heads-up.

The 23-yer old winner is a full-time poker player from Muzaffarpur, Bihar. Gutshot caught up with him to ask him about his introduction to poker. He said, “My friend Aayush Barolia introduced me to the game. I started my poker journey with Adda52. I remember the day when I shipped an INR 10 buy-in tourney; I was happy like I achieved a big thing and that feeling was awesome.”