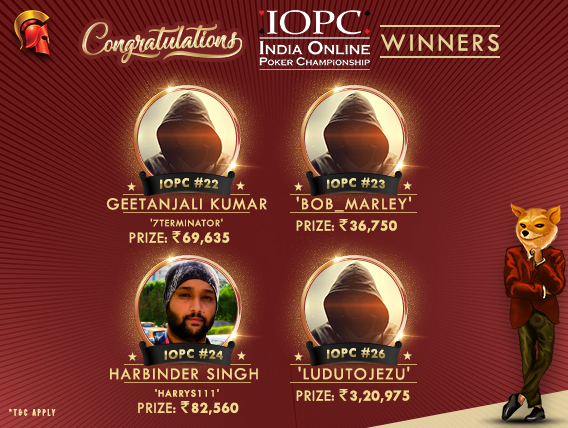 
One of the most anticipated events of 2019 is undoubtedly the India Online Poker Championship (IOPC) hosted by one of the leading brands in the Indian circuit – The Spartan Poker. The series has over 8.5 Crores GTD and began on 11th January 2019 and the first five days already saw huge pay-checks awarded to a total of 26 winners. Almost all events  broke the guarantee in the IOPC till now.

The first tournament for Day 5 of IOPC began on a relatively lower note with an INR 2 Lakhs GTD event. The event again crushed the original guarantee again and created a prize pool of INR 3,66,500, all chipped in by the 342 entries.

The winner to emerge from the tournament out of the 45 paid places was Geetanjali Kumar aka ‘7TERMINATOR‘. She won INR 69,635 for shipping the tournament, beating ‘MadOrWat’ in heads-up to bag her title. The runner-up took home INR 50,394 for his finish. Both had matched a Nine-pair in the final hand, but Kumar managed to ship the tourney with a higher kicker.

Kumar hails from Gurgaon and is a fairly new entrant in the scene. We got in touch with her after her victory and she had this to say about it, “It was a very nice experience. Nowhere in the tourney I had a big stack, but I managed to survive till the Final Table with the lowest stack. Slowly building the stack, I finally shipped it. Heads-up was tough but quite a thrill. I finally took him down and succeeded!”

A lot of female players are taking part in the online tournaments and cashing out big too. The industry hopes that this trend continues far in the future.

The second event after the 2L GTD was INR 1.75 Lakhs GTD Freeze-Out. The format of the tournament meant that only one entry per person was allowed and no re-entries after getting busted. The event drew 233 entries and the winner to emerge from it was ‘bob_marley’ taking home INR 36,750.

The winner beat another reg ‘GTOsucks’ to bag the title. The runner-up is anonymous but has been playing and winning a lot these past months and everyone in the community is anxious to know who the player behind this is.

The final hand saw an pre-flop all-in situation, where GTOsucks shoved with Qh As and bob_marley called with Kh 7h. bob_marley had a little over 2.5:1 chip lead over GTOsucks. The board opened Ts 7s 3c 9s Kc, making two-pair for the eventual winner and beating GTOsucks’ high card Ace, who had to settle for INR 25,725 as runner-up cash prize.

The next in line was 3L GTD. The smaller events till now have almost always been crossing the guarantee and this tournament also followed suit. It drew a total of 265 entries and created a prize pool of INR 4,12,800. Out of the top 36 places paid for a min-cash of INR 2,683, the largest cash prize of 1st place was bagged by Harbinder Singh aka ‘Harrys111’. HE took home INR 82,560 for his finish, beating ‘gareeeeb’ in heads-up. The runner-up also bagged a decent cash prize of INR 57,792. Singh beat his opponent with an Eight-pair after a pre-flop all-in.

We got in touch with Singh after his win and he described his experience saying, “Although this tournament was seamless from the beginning till the Final Table, it gave me another welcome experience to prepare myself for upcoming tournaments.”

The last tournament of the day was scheduled after the biggest event for the day, Mega Stack 12 Lakhs GTD. The tournament was the second biggest one and had a guarantee of INR 12.5 Lakhs and created a massive field of 694 entries, creating a prize pool of INR 17,35,000. The winner to emerge from the grind and the last winner for the day was ‘ludutojezu’. He took a cool INR 3,20,975 as the 1st place cash prize.

The winner beat ‘Donkey 07’ in heads-up to secure his title. The runner-up also won a good INR 2,31,623 for his finish. The final hand of the day and the tournament was again an all-in pre-flop by Donkey 07. The eventual winner made a flush with 5c Ad against opponent’s Ace to Five straight with As 5s on a board of Qc 4c 2c 9s 3c.

Day 6 of the IOPC is underway as we speak and has the feature tournament of Wednesday, Destiny INR 30 Lakhs GTD, and will most assuredly have a grander field than all the previous Destiny tournaments, so stay tuned to GutshotMagazine.com all the information and results related to IOPC as well as general poker news from around the world.