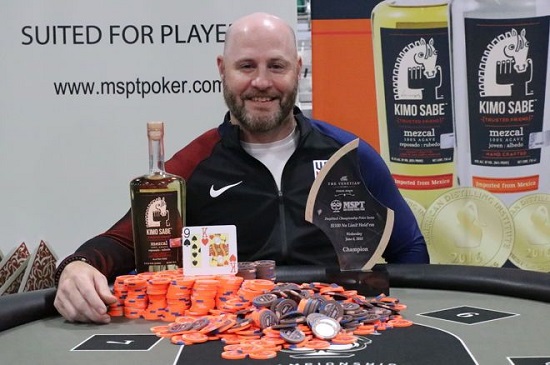 There’s a certain tournament series called the World Series of Poker taking place in Las Vegas as we speak. While tens of thousands of poker players flock to the tables at the Rio All Suite Hotel and Casino to play in the WSOP, there are still quite a few big tournaments taking place elsewhere on the strip.

One such tournament was the annual $1,100 Mid-States Poker Tour (MSPT) held at the Venetian in Las Vegas. While the top poker pros would’ve been interested in WSOP events, many would’ve thought this would’ve been a soft field, and the tournament attracted a massive field of 4,411 entries, creating the largest tournament in the history of both MSPT and The Venetian.

The $3.5 million guaranteed prize pool was crushed and emerging victorious from among this huge field was California’s David Levine. The 44-year old backed up two other titles he secured earlier in 2018 with this win, becoming the second highest of his career and taking his live poker earnings past the $1 million mark.

Levine reached heads up with Peru’s Felipe Davila and the two struck a deal which promised $405,500 to both players, plus an additional $90,000 and the trophy to the winner. “I’m pretty ecstatic. When there were five people left and we were on break, I was down in chips. Even if I busted at that time I was still $150K up, so I felt pretty lucky, I felt good,” he said after winning the tournament.

Four more events are scheduled on the MSPT Venetian calendar for the year and a combined $8.5 million in guaranteed prizes. We are surely going to see more of Levine in those events and he may even be tempted to play for bigger prizes at the World Series of Poker.

Keep reading GutshotMagazine.com for similar results of poker tournaments from around the world.