Since the start of 2018, PokerStars has faced a landslide when it comes to top international poker pros leaving them and moving on to other projects. The reasons have all been very vague, but we have often seen pros quit PokerStars and then almost immediately hop on to the rival brand partypoker as brand ambassadors.

The latest development in this space is that of ‘Kid Poker’ Daniel Negreanu quitting PokerStars after an association that lasted a good 12 years. “I have an important announcement to make about my 12-year run, which is an incredible run, with PokerStars. It was a great run, but [I’m] no longer going to be an ambassador for the company,” he said in a video he posted to Twitter yesterday. 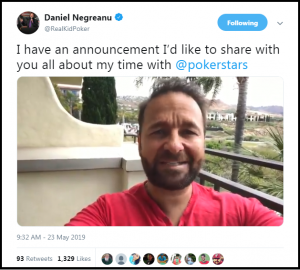 Negreanu signed on as a PokerStars ambassador in June 2007 and this has been the most significant exit from PokerStars after big names like Jason Mercier, Vanessa Selbst, Bertrand Grospellier, Randy Lew, Victor Ramdin, Jeff Gross and others also quit the company in the last year and more.

Like all of these high-profile exits, Negreanu too hasn’t mentioned a concrete reason as to why he has ended this relationship with the global poker leader. The 44-year old Canadian pro was earlier associated with the now defunct Full Contact Poker and there’s a high chance he moves on to something better from here on.

Negreanu has amassed over $38 million in live poker tournaments throughout his career, placed second only behind Justin Bonomo on the all-time poker earnings list. He is a 6-time WSOP gold bracelet winner and was recently in the news when he got married to long-time girlfriend Amanda Leatherman under a week back.

PokerStars also tweeted to confirm this development, saying “This is not a bluff: after 12 great years together, today we part ways with @RealKidPoker, a true legend of the game. GG & GL. #ThankYouDaniel” They attached a video tribute to the poker legend as well.

For all updates on Negreanu’s next major assignment in the poker world, keep following GutshotMagazine.com.