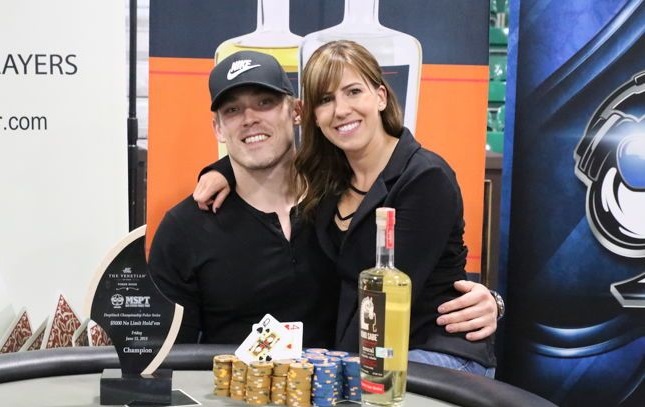 Wouldn’t you want to be in a relationship like the one Alex Foxen and Kristen Bicknell are in? The couple is living the dream together, touring the world and shipping major live poker titles together. Talk about supporting each other’s careers in a relationship and these two are a perfect example.

They then travelled together to play and cash out at various partypoker LIVE MILLIONS events, before making headlines in Las Vegas. Bicknell has slightly over $20k in three WSOP 2018 cashes so far, while Foxen has two cashes, with combined winnings of over $70k.

They decided to take a small diversion from the World Series to enter into the Mid-States Poker Tour (MSPT) $5,000 NLHE Event at The Venetian. The real-life couple reached the final day of the 3-day event and then reached heads-up together, eventually striking a deal whereby both take away $200,000 and an extra $39,000 to the winner.

Foxen shipped the event, after just two hands of heads-up play and 2-time WSOP bracelet winner Bicknell finished in second place. The event became the most expensive buy-in MSPT event and they are to host two more events this summer, one which is already underway at The Venetian and one which will kick off on 25th June.

Foxen has over $4 million in live cashes while Bicknell has over $2 million, and it will be interesting to see how these two keep playing their poker in the future. “It was a lot of fun, certainly some interesting spots at the table,” said Foxen to PokerNews after this tournament.

“In a way it was really fun but then there were some spots that felt really frustrating because I want him to do well but I want to do well. We both want to win, and both want each other to win but that’s not possible so it was a little hard. We talk poker all the time and that makes it a little difficult in hands because we kind of know what each other is thinking. I was a fun experience overall,” said Bicknell about the experience of playing her boyfriend in heads-up.

Keep reading GutshotMagazine.com for similar stories and tournament results from the world of poker.