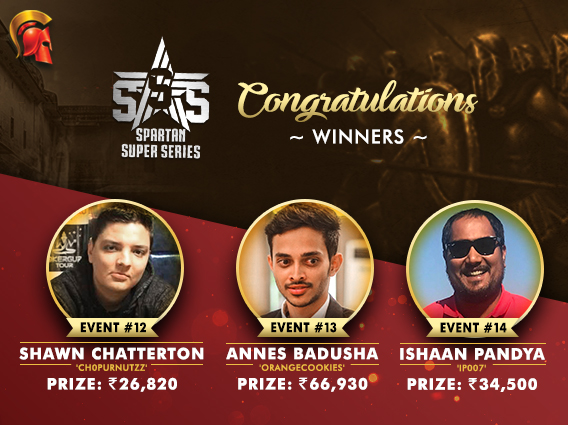 
Every month or so, the Indian poker industry is treated to an edition of the Spartan Super Series (SSS), which is an extremely popular online poker tournament series hosted by Spartan Poker. Yesterday was Day 3 of the February 2019 edition and a total of five events were scheduled for the day.

Two very high-value tournaments were contested later in the night, where Varun Gupta won Triple Bubble and Rohit Mishra emerged victorious in The Elite. Prior to this, three side events were also hosted earlier in the day, with varying buy-ins and guarantees, and several players taking away cash prizes.

The first tournament of the day had a low buy-in of INR 330 and 245 entries meant that the guarantee was passed, as has been the trend in the SSS so far, and a new prize pool of INR 1,34,100 was created. From them, the top 36 players were paid out with the minimum cash being set at INR 871. However, the biggest prize of the night went out to Shawn Chatterton aka ‘Ch0pUrNutZZ’ who won a prize of INR 26,820 for these efforts. In heads-up, he beat recent IOPC Event #1 winner Sanat Kaikini aka ‘imalucksac’ who won INR 18,774 for his runner-up finish.

The second tournament of SSS Day 3 had a higher buy-in of INR 1,100 and a slightly higher guarantee as well, with a total of 177 unique players joining the tournament. From them, the top 24 places were paid out a min-cash of INR 2,910. Emerging victorious from this field was Annes Badusha aka ‘ORANGECOOKIES’ who took away the top prize of INR 66,930 for his efforts. In heads-up, he got past Vishal Madan aka ‘T.Solotov’ who also won a decent prize of INR 44,959 after winning a tournament on SSS Day 1. The last hand saw a pre-flop all-in, where Badusha won with just high card, Ace. When contacted about this victory, he told Gutshot, “I won this tournament right after changing my screen name, so a big thanks to Spartan for letting me change my name. Really worked out well.”

Before the major tournaments kicked off last night, this was the last of the side events, with a buy-in of INR 550. A total of 165 players registered to the tournament and a total of 24 places were paid out a min-cash of INR 1,500. It was a great effort from Ishaan Pandya aka ‘ip007’ to emerge victorious from this tough field, getting past several top players including Arjanveer Chadha aka ‘instrumental’ in heads-up. Pandya was paid out INR 34,500, while Chadha took away INR 23,175 for finishing second.