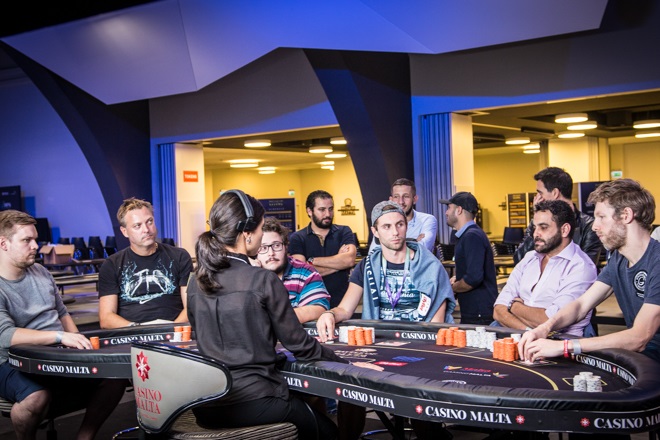 The final table is all set in the MPNPT @ Battle of Malta Main Event, and spectators at the rail and on the MPNPT Twitch stream are in for a vintage afternoon of high-level poker as this massive tournament draws to its thrilling denouement.

Maxime Canevet holds a hefty chip lead going into the nine-handed final table; on 25,925,000, he is in possession of well over a quarter of the chips in play, and is head and shoulders above the next man, start-of-day chip leader and MPNPT Tallinn finalist Mantas Urbonas. Also still in contention are previous MPNPT finalists Andy Hills and Mateusz Moolhuizen, who, despite their more modest stacks, have already proved themselves more than capable of going the distance.

Three players who made it to Day 3 were also assured an extra prize on top of their tournament earnings – as the last three qualifiers in the Main Event who were eligible for MPNPT’s last longer promotion, Mateusz Moolhuizen (Betsson Poker), Mantas Urbonas (Olybet) and Sebastian Gruszczynski (Betsafe Poker) each won themselves a €1,500 package to MPNPT Tallinn. Gruszczynski cashed in 56th place (€4,300) but will be back at MPNPT Tallinn, while Urbonas and Moolhuizen will of course be back at Casino Malta at 2pm to battle it out for the Main Event title.

Meanwhile, the €1,200 + €120 High Roller event has also reached a final table – nine players remain, with Italy’s Simone Speranza holding a decisive lead over a tough table that also features MPNPT Tallinn champion Ranno Sootla and Estonian poker legend Henri Kasper. They will also be reconvening in Casino Malta at 2pm local time to battle it out over a €60,000 first prize.

The Main Event final table begins at 2pm and will be streamed live with a 30 minute delay from 2.30pm on Twitch, while hands, chip counts and photos from both the Main Event and the High Roller will be posted to the MPNPT blog throughout the day, giving viewers around the world a ringside seat for the culmination of this historic poker event.