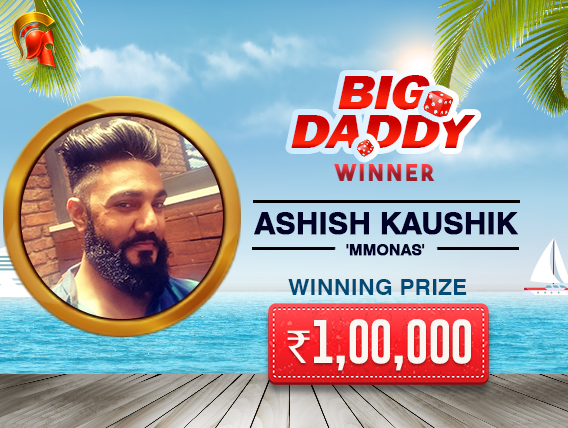 
One of the feature Sunday tournament on The Spartan Poker is always the Big Daddy INR 5 lakhs GTD. The tournament was initially started to commemorate the India Poker Championship (IPC) Team’s takeover of the Big Daddy poker room in Goa back in May 2018. Since then, Spartan has given a lot of budding players with an opportunity to test their skills in live scenarios.

Last evening’s Big Daddy attracted a total of 259 entries (including 44 re-entries) and began at 4 pm. The tournament was in the books by 9.08 pm on the same day. The over 5-hour grind produced Ashish Kaushik aka ‘mmonas’ as the winner, taking home INR 1 Lakh.

Kaushik beat ‘Alliswell’ in the heads-up battle. The last hand of this tournament happened at Level 40 with blinds at 20k/40k/ante 4k. The eventual champion was with a little less than 1.5:1 chip lead before the final hand, not a significant one. On the flop of Ks 5h Js, the shove happened. Alliswell was with 9h Qh and held a gutshot straight draw, while Kaushik had already made a pair of Jacks with 7c Jc and called. While the turn and the river of Qs and 7h didn’t complete Alliswell’s straight, it gave Kaushik with a Seven-pair, having hit Jacks already, and was enough to beat his opponent’s Queen pair. The runner-up took home INR 70k.

Kaushik is not an unknown player. He previously shipped three significant tournaments just on Spartan. The first one was winning the DareDevil for INR 1.75 Lakhs back in May last year. Barely two days after, he shipped the Mega Freeze for INR 1,10,117. He even won an event in the September’s SSS on Spartan. The player will be looking to convert this INR 1 Lakh into more winnings in the future.

We spoke to Kaushik after this particular win and he said, “It felt great to win this tourney as this was after a very long time and was very much required to break the bad run. Though it didn’t come easy, it took a lot of patience. I’m looking forward to some more wins to get back in the race.”

Keep reading GutshotMagazine.com for more tournament updates and results as well as for your daily dose of poker news from around the world.