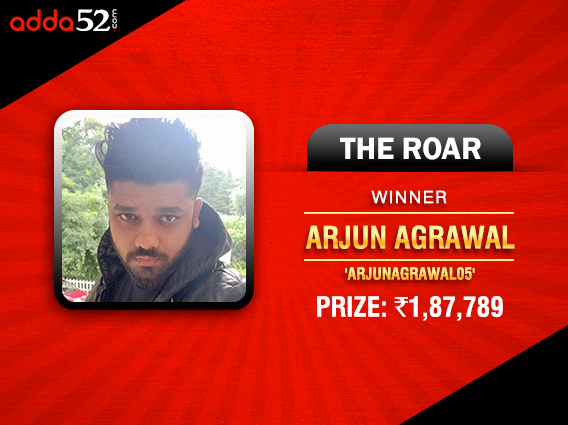 Sometimes players like Virat Kohli and Rohit Sharma just get in the zone and start seeing the cricket ball like a volleyball, smashing it all over the park and displaying some rich form over the course of a series. Similarly, poker players get into their zones sometimes, winning and winning across several platforms.

For Arjun Agarwal, Adda52 seems to be a favourite at the moment, as he’s winning a lot on their platform over the last few days. Now, he has taken his winning streak to two titles in two days on Adda52, backing up his Chip Up series Main Event victory from a couple of nights back.

Monday nights on their platform is the INR 7 lakh GTD The Roar tournament, where players pay an INR 4,400 entry fee to participate. By the time the registration period shut, there were a total of 133 entries.

This prize pool was divided among the top 8 players and there were a handful of known players getting paid out too, with the minimum cash being INR 21,000. As the pay-outs began, WSOP bracelet winner Aditya Sushant aka ‘A_Sushant’ soon busted his stack in 6th place, winning INR 42,000.

Another top player in Manish Lakhotia aka ‘newkidpoker’ ended a good run on the night, finishing 4th for INR 77,000. However, the player who outlasted everyone else and took down the biggest prize of the night was Arjun Agrawal aka ‘arjunagrawal05’, winning titles on two consecutive days on Adda52.

At the end of the tournament, Agrawal and ‘nalasoopara’ were evenly matched in stacks and none of these players wanted to miss out on the big pay jump between 1st and 2nd place, so they agreed on a heads-up deal. Agrawal was ahead in chips, so he won INR 1,87,789 and the title, while nalasoopara took away INR 1,86,711 for finishing second.