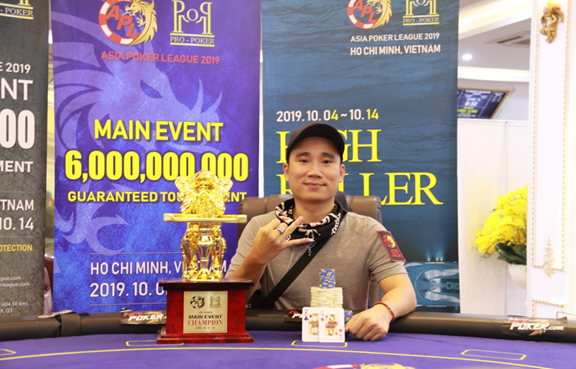 A wide number of poker fanatics are entering tournaments that are currently being hosted in the Asian region and numerous players are looking forward to adding titles to their poker career. The Asia Poker League (APL) recently made a stop in Ho Chi Minh City at Pro Poker Club in Vietnam.

The series was scheduled from 4-14 October and yet another chapter came to a standstill following the triumph of Vietnam’s Terry Nguyen who eliminated several hopefuls in the Main Event. The tournament began with a pretty decent 365 runners, entering for a buy-in of VND 16.5 million each. There was a slight overlay in the prize pool but eventually, the top 46 places received a paycheck.

The final table saw the Vietnamese chip leader Cao Ngoc Anh from Day 3 making deep runs but ultimately fell into 15th place. In the final hand of the tournament, 3 players remained, namely Cheng Lin, The Anh, and Terry Nguyen. After the elimination of Lin, heads-up began between the countrymates. Nguyen took the prestigious title adding a massive VND 1.2 billion to his bankroll.

APL is surely rising in action in Vietnam marking its third stop in 2019. The upcoming APL China is scheduled to commence in November 2019 for the second time. For latest updates on poker news and tournaments around the world keep reading GutshotMagazine.com and stay tuned!