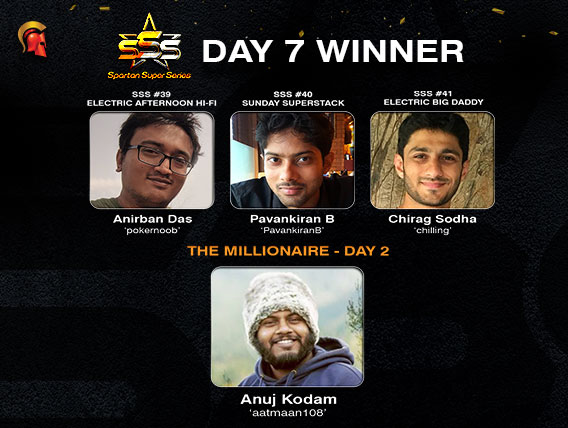 
Yesterday was packed with fierce action as the online felt was all warmed-up with a wide range of tournaments and a long list of side events. The Spartan Super Series (SSS), a weeklong series came to a halt enticing several poker fanatics and providing each one a chance to win big. Besides, The Millionaire also crowned its champion only on Spartan Poker.

The most awaited event, Millionaire guaranteeing 1 Crore saw various chip leaders progressing in the hope to grab the enormous prize money. Day 1C saw a total of 219 players entering for a buy-in of INR 11,000. Claiming the day and bagging the largest stack of the day was none other than WSOP bracelet winner Abhinav Iyer aka ‘Schumi91’ with 267,002 chips followed by ‘FunkyouFTW1’ with 233,412 chips.

The guarantee was smashed to create a prize pool of INR 1.27 Crore which was later shared among the top 183 players, each receiving a minimum amount of INR 18,487. The remaining 147 players resumed on the final Day 2. The tournament proved to be immensely successful, crowning its ultimate champion Anuj Kodam aka ‘aatmaan108’ who shipped the tournament taking away the biggest share from the prize pool. Kodam is a well-known player who has major titles across various online websites.

8c 2c Ks Ac 3d on board, fate was in favor of Kodam who defeated the latter with his trip Aces while his opponent hit a single pair KK. The 7-day long SSS tournament series lined up another 5 events also awarding its worthy winners before the series came to a conclusion on Spartan Poker.

The first tournament on the final day saw 449 players entering for a buy-in of INR 330. The prize pool was received by the top 31 places being paid out a min-cash of INR 1,185. Triumphing the event was ‘3betshove’ who beat ‘river_king’ in heads-up and shipped the tournament adding healthy prize money to his poker bankroll while the latter settled for the runner-up position.

As the day progressed the buy-in increased up to INR 2,200 enticing a total of 225 players. It was ‘Drifter2’ who emerged victoriously and took home the first-place prize money, after all the remaining players settled for a deal. With ‘Drifter2’ carrying the largest stack out of the final 4 at the time of the deal, he won the tournament making another decent addition to his poker bankroll.

If you are an active player on Spartan Poker, you must know the well-known player Anirban Das aka ‘pokernoob’ who shipped the tournament yesterday after beating ‘EatME_imFISH’ in heads-up battle with his higher two pairs of TT22 while the runner-up held the smallest pair of 22. The entire tournament drew 304 players and the prize pool was eventually shared among the top 24 places receiving a min-cash of INR 3,040.

The biggest event of the night apart from Millionaire was Sunday SuperStack, another featured tournament always attracting well-known players. With a buy-in of INR 5,500, a total of 516 players entered. The guarantee slightly surpassed creating a prize pool to be shared among the top 47 places. It was Pavankiran B aka ‘PavankiranB’ who emerged victoriously after defeating ‘Blubblegum’ in heads-up who eventually settled for the runner-up position.

Gutshot Magazine spoke to Pavankiran after this major victory and he expressed, “It was a pretty competitive field and I consider this as my biggest achievement. Also, I would like to thank Spartan Poker for organizing such tournaments.”

The final tournament of the day was Electric Big Daddy witnessing a field of 400 entries, each chipping in INR 1,650 buy-in. The prize pool was drawn to be shared among the top 27 places being paid out min-cash of INR 6,000. The player of the night was Chirag Sodha aka ‘chilling’ who made an addition to his poker bankroll after triumphing the final event and defeating ‘Bluff.me.not’ in heads-up with his higher pair of 88 while the runner-up was holding single pair 55.

For latest updates on live and online tournaments around the world keep reading GutshotMagazine.com and stay tuned!