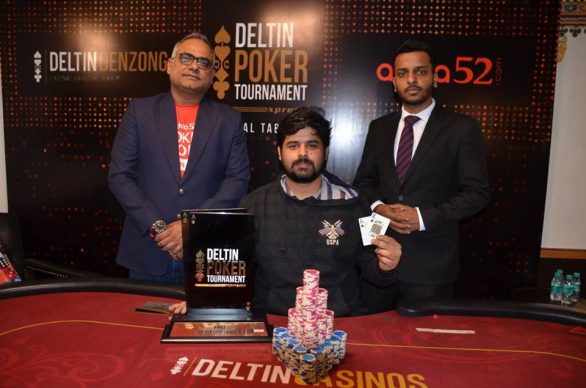 
The INR 15k Main Event Final Table of the 2nd edition of the Deltin Poker Tournament Xpress (DPTX) was underway yesterday at the Deltin Denzong in Gangtok, Sikkim. The field of 64 entries on the starting day of the event whittled down to Final 9 who fought tooth and nail for the prestigious title.

Abhishek Sharma had bagged 401k chips at the end of yesterday and was in the lead, but it was the 3rd in chip counts Ankit Jajodia who aced the table and shipped his first live event for an awesome cash prize of INR 3,25,000. He beat known regular of the community Sajjan Barnwal to ship the title.

The Main Event FT started playing at 3 pm yesterday with levels increasing at 30-minute intervals. It started with Level 13 with blinds at 4k/8k/8k (big blind ante). Defending Champion Bhola Sharma was the first to fall at 9th for INR 33,840. FT chip leader Sharma railed Sanchit Pandey next at 8th place for 38,000.

Radhika Shankar was the only female playing on the FT but was busted at 7th for 41,000 by the hands of the eventual winner Jajodia. Gradually, the field whittled down 2 players and the heads-up battle began. Jajodia began the battle with almost 3:1 chip lead. In the final hand Jajodia shoved As Ks before the flop and Barnwal called with Ah 9c. The board revealed 5c 2d Qs Jd Jh and Jajodia won with a higher kicker and lifted the trophy. Barnwal settled for INR 1,85,000 runner-up cash prize.

Jajodia is a decent live player and had three previous recorded live cashes, all from December 2018 Manila Megastack 10. With the DPTX ME win, he has bagged his first ever live title and a healthy cash prize. He will be looking forward to continuing this trend and win some more events like these in coming months.

The Main Event attracted a lot of players and the series ran more vigorously than the previous inaugural edition, which was expected. Apart from the Main Event, two more events are lined-up for today, so stay tuned to GutshotMagazine.com for similar updates from DPTX.