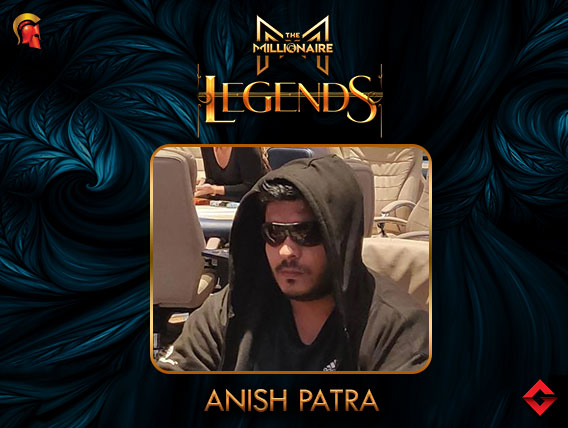 
Just a few days ago, Spartan Poker hosted Millionaire Legends INR 2 Crore GTD, which was the first ever Millionaire tournament with a buy-in as high as INR 27,000. A multi-flight tournament that ran for three days, the guarantee was broken, and we witnessed a prize pool in excess of INR 2.1 Crore, giving players a chance to add some major prizes to their poker bankrolls.

Day 872 entries participated across three starting flights and when Day 2 resumed on Sunday, we had just 151 entries still standing. As the night progressed, the pay jumps kept getting bigger and the levels of intensity were going through the roof. Eventually however, we had a champion and it was Anish Patra who goes by the name of ‘Illusionist’ on Spartan.

He waded through the field and when Nadeem Basha aka ‘blindgame’ was sent out in third place, it was just Patra left with Vikranth Varma aka ‘borntrouble’. The two realized how big the pay differences were and called for a deal which saw Patra earning a massive chunk of the prize pool, with Varma taking away a prize slightly smaller than his opponent.

Of course, it would’ve been a happy night for Patra who apart from this Millionaire victory on Spartan Poker, also shipped Mega Suits that night on Adda52 for another handsome bankroll addition. Gutshot caught up with the player to know what was going through his mind and of course, what it feels like to be one of the biggest online poker winners in the country!

Hi Anish. What does ‘Millionaire’ mean to online poker players and the industry as a whole?

“The inception of Millionaire is synonymous with the growth of online poker in India. Back in 2015, when I started out, we used to have INR 5 Lakh and INR 10 Lakh GTD tournaments as the flagship events on sites. Having an INR 2 Crore GTD tournament is a testimony to how far we’ve come as an industry.”

How did you reach when you knew the buy-in had more than doubled to 27k?

“Along with the increase in the buy-in, the guaranteed prize pool doubled to INR 2 Crore (which was also crushed) so congrats to Spartan Poker for that. I am comfortable playing the higher buy-in MTTs and have been doing alright in them, so I was more than happy with this change.”

“The final table had some very accomplished players in Nadeem Basha, Sajal Gupta, Neeraj Kumar, Manish Lakhotia, and Vikranth Varma. I started as the shortest stack and was down to about 5 big blinds at one point. The plan was never to bleed out my stack for a couple of pay jumps. The idea was always to play solid, pick my spots, and try and come in the top 2-3 places where all the money was. There was no pressure at all. I just wanted to play my ranges and take the mathematically correct decisions irrespective of the outcome. Very fortunate that I was on the right side of variance when it mattered.”

Explain the feeling of being a Spartan Millionaire, being among some of India’s biggest online winners?

“It feels wonderful to come out on top of such a high-profile event that had some of the best players in the country. A big thank you to everyone who has supported me through this, it only motivates me to try and do even better. I would also like to thank Spartan Poker for having given me this platform and opportunity.”

On a parting note, we asked Patra what his plans were with this prize money and he replied like a true poker player saying, “I will add some of it to my poker bankroll and invest the major chunk in the financial markets.”

For more similar updates from the world of poker and gaming, stay tuned to GutshotMagazine.com.