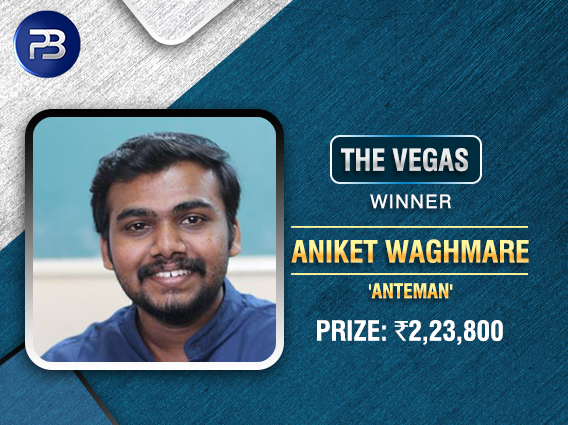 Who was your childhood superhero? Batman? Superman? Spiderman? Or was it the more recent Ironman? Well, poker is rapidly rising in the country and the passion for the game has led to the formation of a new superhero called ‘Anteman’. Superhero identities are generally a secret but we’re very happy to tell you about Aniket Waghmare aka ‘Anteman’.

This is an up and coming poker player who has cashed several times in the last couple of months across all the major Indian online poker platforms, while also adding a handful of trophies to his cabinet. His rise to fame began a little over a month back when he shipped the Big Daddy tournament.

Following that, Waghmare took down not one, but two titles in the SSS series on Spartan and now he has decided to take this brilliant form to other platforms as well, last night making another huge bankroll addition on PokerBaazi. He grinded long last night and was able to ship The Vegas for a massive top prize of INR 2,23,800.

The Vegas INR 10 lakh GTD kicked off last night with a buy-in of INR 3,300 and by the end of the night, Waghmare managed to outlast a huge field of 373 entries including some of India’s best online pros to take down the tournament. In heads-up, be got past Rubin Labroo aka ‘kornkid’ in heads-up and this pro has some serious achievements in online poker, including being a part of the winning Match IPL team a week back.

Labroo claimed the second-place prize of INR 1,65,052 as the top 31 places were paid out a minimum of INR 11,190. Another top players who finished in 5th place for INR 67,140 was Mayank Jaggi aka ‘alwaystiltAA’, who is on a roll at the moment, having shipped The Endeavour on PokerBaazi just the previous night.