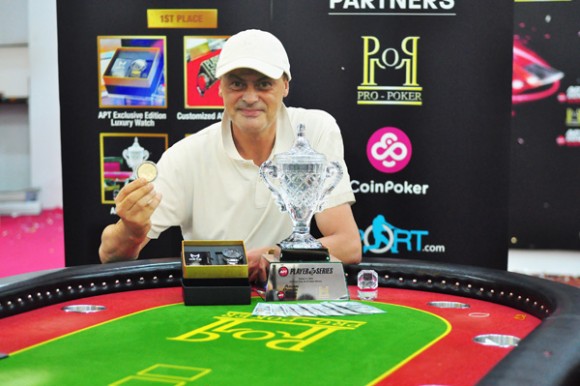 The Asian Poker Tour (APT) recently held a live tournament series at the Pro Poker Club in Ho Chi Minh, Vietnam. The series was spread out between 5-11 October 2018 and at the end of the series, quite a few players walked away from Vietnam as much richer than how they walked in.

Apart from the individual tournament winners, the APT also names an APT Player of the Series at each stop, which goes out to the best player throughout the series. Initially, Japan’s Enoki Tetsuya was declared as the APT Vietnam PoS due to 2 cashes and 2 titles in the series, with a total of 722.69 points.

However, the APT later announced that this time, there will be not one, but two players receiving the PoS awards, for the first time ever. The competition was tough and hence the organizers had to name Germany’s Andreas Rauh as the Co-Player of the series, who also had 2 titles but 4 cashes in the series.

In fact, Rauh ended with more points than Tetsuya, accumulating a total of 759.05 points to top the table. Lloyd Fontillas, APT General Manager and Executive Tournament Director mentioned how this was the closest finish for the APT Player of the Series race. He also said, “We are delighted that for the first time ever we have two talented players being awarded.”