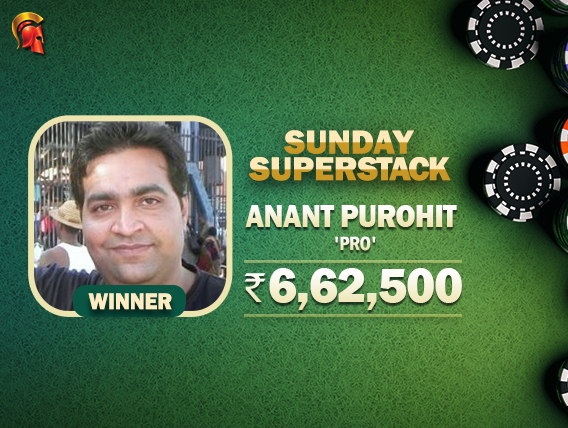 
Every Sunday, Spartan Poker hosts the Sunday SuperStack INR 25 Lakhs GTD, their feature tournament of the day. Since Sunday is a work day off for every citizen, the tournaments see a surge in turnout and hence big guarantees are kept and huge cash prizes are awarded every week on Sunday.

The tournament yesterday began at 7.30 pm in the evening and was in the books by 2.44 am today morning. The turnout amounted to 498 entries (71 re-entries, 175 re-buys), each putting up the INR 5.5k buy-in. The long haul of over 7 hours produced the winner to be well-known circuit grinder Anant Purohit aka ‘Pro’, who took home INR 6,62,500 as first-place cash prize.

The winner beat ‘Draughtt’ in the heads-up battle. In the last hand, he had an overwhelming lead of over 4.5:1. He went all-in pre-flop with 8h Kh against Draughtt’s As Td, who called. The board came to Ks 4c 2c 7d 9c and gave Purohit Kings on the flop itself which was enough to beat Draughtt’s Ace-high. He settled for the second-place cash prize of INR 4,12,500, not a bad amount at all.

The winner of last night’s SuperStack, Purohit, is a known entity amongst the Indian poker community. He has made quite a name for himself in the online scenario. He recently won a title in the Spartan Super Series last month. Before that, he won the Diwali Special Mega Stack on Spartan. He even won a Destiny tournament in Spartan last August after winning his first IOPC title in July. However, this is not the first time he won Sunday SuperStack, having won it earlier in December 2017 for INR 10 Lakhs!

Purohit has been playing for a long time now and is recognized by almost everyone in the community who follows daily poker tournaments. He will be looking to add a good amount to his bankroll which will help him sign-up for more exciting range of tournaments coming up in the future.

We got in touch with Purohit after his win and he had this to say, “Shipping something big on Sunday always feels good. I’m really very happy winning something good on Spartan after a gap. I was playing with a firm mindset of going till top 5 from the start and made a few really tough folds to achieve that. Final Table was quite aggressive and tough but I had a big advantage being the chip leader. I capitalized on that by playing aggressively and never let my chip lead go. The tournament’s structure is awesome and thanks to Spartan for keeping awesome tourneys on Sundays.“

Keep reading GutshotMagazine.com for more such daily tournament round-ups, results and for general poker news from around the world.