The biggest tournament of the 2019 WPT Vietnam hosted at the Pro Poker Club in Ho Chi Minh City witnessed a good turnout of 686 entries. After 5 days of some intense competition, the champion of the VND 25 million Main Event was finally declared yesterday. Vincent Chauve (pictured below) emerged victorious and took home a heavy chunk of VND 2,300,000,000 (~INR 68.71 Lakhs).

While it was Thailand’s Chauve that won the Main Event, our Indian contingent was also present in the event and did not fail to leave a mark. Indian pros the likes of Sumit Sapra, Neel Joshi, Vinay B, Eka Vedantham, Ashish Munot, Alok Birewar (pictured below), etc. were in contention in the tournament.

Defending Champion Dhaval Mudgal was also running to defend his title but unfortunately couldn’t qualify for Day 2. A total of 15 Indians reached Day 2 which was played a day before yesterday, but it was Birewar who managed to progress to Day 3 at 14th in chip stack, deepest among Indians. 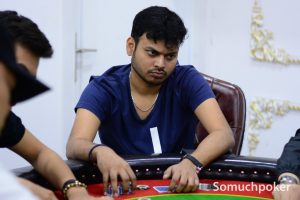 Birewar busted early yesterday after running well in the Main Event throughout. He won a cool VND 230,350,000 (~INR 6.88 Lakhs) as the first-place cash prize.  Birewar shoved with 3c against Tuan Pro’s 3d 3s. The board ran 6h 7d Kh Kc Qd and Pro’s Threes and Kings were enough for him to rail Birewar at 12th place. Birewar is well-known community entity and a regular live poker player. He has earned some huge cashes and a few titles in his career till now including DPT and WPTDS India titles.

Coming to the champion of 2019 WPT Vietnam ME, Chauve has now topped the WPT Asia Pacific Player of the Year race bagging 1,500 points. He later said, “I feel amazing. There was a lot of emotions today, I feel a bit tired but I feel amazing. Best of my life, very good!”

About his FT gameplay, he said, “I felt very confident at the start of the Final Table, I was feeling like I’m gonna win. I felt every second was so good. Amazing. There’s a big chance I will go to New Zealand to defend the Player of the Year title.”

Keep reading GutshotMagazine.com for more such tournament updates and results from Asia and from around the world.