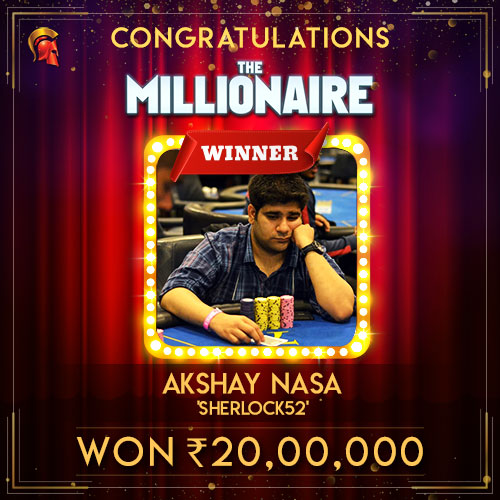 
Every month the excitement for The Millionaire amongst poker players is increasing and it shows in the great numbers exhibited at TheSpartanPoker. Last night was a big night, in the fact the biggest for Spartan’s signature tournament, as 1427 entries took part in the Millionaire to make a massive prizepool of INR 71,35,000. The top 130 players cashed out for a minimum payday of INR 8,562. It was Gurgaon based Akshay Nasa who plays under the moniker ‘sherlock52’ who ended up shipping this major tournament for a huge INR 20,00,000 and the other Millionaire of the night was runner-up Eka Vedantham a.k.a ‘gettingthere’ taking second place for INR 10,70,250.

Coming back to the champion Akshay ‘sherlock52’ Nasa, whose latest feather in his cap is added to the win he scored in the Destiny series’ second edition. The finale which is scheduled on 29 October will see 10 players battle it out for an INR 10 lakhs package to Las Vegas. Speaking about the highlight of his week, Nasa said, “It was an amazing experience; this was the best poker Sunday of my life so far. I ran well during the whole tournament winning most of my flips. I was almost busted when I was all in with Ace-Queen against Ace-King when around 35 people left but clipped a Queen to survive. And then there was this one hand where I got it in with 2c 4c on Qx 5c 6c board against Kc 9c and got extremely lucky.”

According to Nasa, Siddarth ‘PeterPunter’ Singhvi and a player called ‘dadarwest’ were the ones he considered as tough competition, “This player ‘dadarwest’ was playing brilliant poker but he got busted before final table by Eka Vedantham.”

When asked what he will do with this big chunk money, he said, “Will refrain from making any other live trips till the World Series of Poker (WSOP). Till then will focus on building a bankroll and studying the game to give myself better chance at the WSOP.”

Spartan has always made sure to provide big value tournaments and have tried to couple equally fun and valuable promotions to go along with those tourneys. One of the two promotions for this particular Millionaire allowed players to contest for a brand new iPhone 8. The contest rules stated that the player with the maximum number of re-entries who fulfilled certain criteria of posting on social media would take home this much coveted gadget. It was none other than Vikash ‘Vikinse’ Khaitan who went onto claim this prize. The second promotion was Last Man Standing contest where the winner would win a cash prize of INR 3,74,000 plus buy-ins into featured tournaments for the entire week at Spartan and it was Ankit ‘ankitw’ Wadhwan who went onto win this contest.

Just One Rupee Leads to Thousands

And so another top value Sunday at The Spartan Poker comes to an end but the next one will come along soon enough which is prefaced by another top tournament in the 2.o.K (Two of a Kind) where not one but the top 2 finishers make INR 10 lakhs each. So catch your poker action at the 2.o.K and Millionaire on the first two Sundays of every month at The Spartan Poker and stay tuned to GutshotMagazine for coverage from all these stories and more.