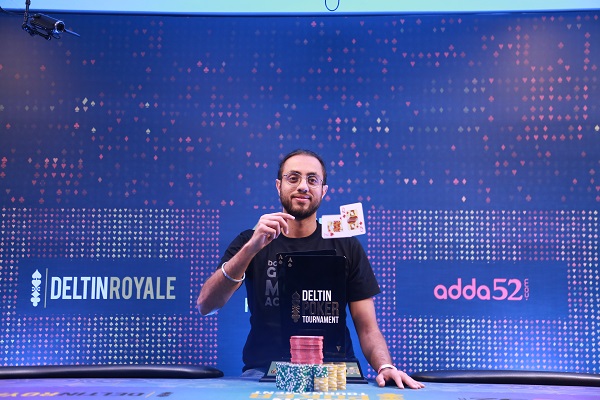 
Another tournament has come to an end at the ongoing Deltin Poker Tournament (DPT) in Goa. After Nikita Luther took down the INR 15k Deep Dive tournament, the next tournament to come to an end was the INR 65k Adda52 High Roller, where Abhishek Goindi emerged victorious.

After Day 1 of the tournament, Joey Saha held a massive chip lead, but he wasn’t able to capitalize on that initial lead. A total of 86 entries were registered to the high-stakes tournament, and it was Goindi who took home the title, trophy and of course, the massive first-place prize of INR 14,50,000.

When the 9-handed Final Table was formed, it was Shashank Jain who held an overwhelming lead, almost double the next best stack of Goindi. However, Goindi was very composed on the FT, chipping up regularly and eventually claiming his first ever DPT tournament victory.

It was Level 25 of the tournament when the winner was declared, with the blinds at 20k-40k, along with the BB ante of 40k. Here, Pradeep Sharma moved all-in pre-flop for 750k and Goindi made the call, holding the bigger stack. Sharma revealed 6h Qh while Goindi showed Qd Kh and the latter won the final hand with just HIGH CARD – KING, as the board rolled out 5s 2h 9c 8h 10s.

It was a pretty decent effort from Sharma too, who began the FT as the second shortest stack, so he did very well to finish as the runner-up and take away a prize of INR 9,90,000. It was good to see the defending champion Eka Vedantham also in the mix, finishing 6th for INR 3,00,000.