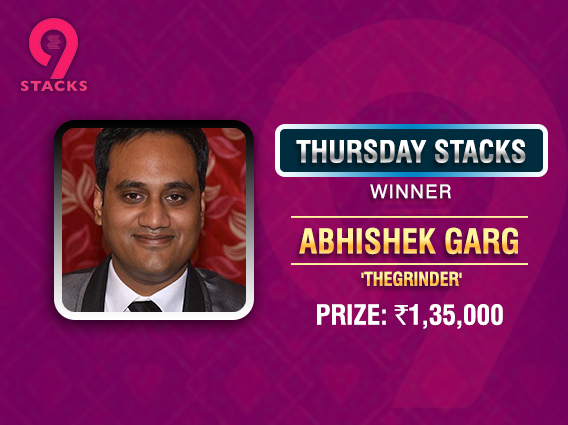 
9stacks is one budding poker company in India which regularly hosts tournaments on their platform for a reasonable buy-in, suiting all kinds of pockets. Their Prime Time @ 8 promotion sees them hosting high-stakes events at 8 pm on 9stacks, which have, over time, become an attraction among poker masses of this country. They are also hosting the Prime Time Leaderboard Challenge to go with it, which ends on 30th December.

Abhishek Garg is a player who has been quite consistent in ranking in the top in tournaments after tournaments on various online poker platforms in India. He has scaled the Summit already on PokerBaazi last month for upwards of INR 3.2 Lakhs. He also shipped the DareDevil on Spartan a few days back for over INR 1.7 Lakhs.

A couple nights ago, he won the 9stacks Wednesday Stacks tournament for INR 1,35,000. Last night’s INR 5 Lakhs GTD Thursday Stacks on 9stacks saw him take the title and the 1st place cash prize of INR 1,35,000 again. The player is on a roll and won’t stop until he wins all of 9stacks feature tournaments of the week. If he tops the Prime Time Leaderboard Challenge on 9stacks, something that’s likely to happen, it will be well deserved.

Yesterday’s tournament began at 8 pm on 9stacks, going in tune with their Prime Time @ 8 promotion. The tournament had a buy-in of INR 3,300 and top 15 places were paid out for a minimum cash of INR 7,000. Garg, playing under his handle ‘TheGrinder’, emerged victorious after over 5 hours of grinding on 9stacks and beating a field of 117 entries (34 re-buys) in all.

The heads-up battle saw Garg face ‘rn275’ but the opponent had to settle for INR 95,000 for runner-up cash prize as Garg was aiming straight for the back-to-back win. Gutshot in touch with Garg after his awesome double finish on 9stacks and he had this to say “It feels great to win the Prime Time tournament twice in a row. I almost had around 70% of chips with 6 players left and I was pretty confident that I can win this one easily and it panned out as I expected. With the heavy chip advantage, I played very aggressively and won the tournament.”

Today being Friday, 9stacks will host the HI-FRI Stacks of INR 10 Lakhs GTD at 8 pm and the tournament always attracts a big field from across the country. Keep reading GutshotMagazine.com for more tournament details, announcements and general poker news from around the world.