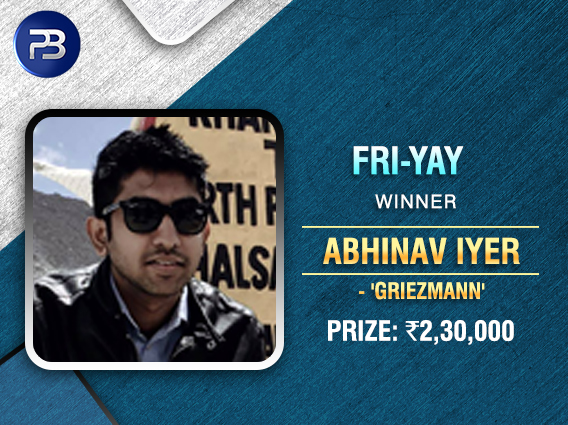 
A lot of poker players in the Indian circuit began the year on a spectacular note. Some won feature tournaments on leading online platforms and made the most out of the exciting line-up of events in January, but none had it like Abhinav Iyer.

Iyer won the 2019 APT Vietnam Kickoff ME for over INR 69 Lakhs, making his best live finish till date. He then won the biggest tournament of IOPC Day 1 – The Elite INR 30 Lakhs GTD– earning another awesome cash prize of INR 7,11,857 there. Now he has shipped yesterday’s feature tournament on PokerBaazi – FRI-YAY INR 10 Lakhs GTD – earning INR 2,30,000 as the 1st place cash prize.

FRI-YAY attracted a field of 309 entries (including 137 re-entries) for a buy-in of INR 3,300. Iyer, playing under his PokerBaazi moniker ‘griezmann’, slashed through the field and a tough final table to bag his third title and second online title this month. He beat another well-known grinder Rubin Labroo aka ‘kornkid’ in heads-up. Labroo had to settle for INR 1,54,500 as runner-up cash prize.

Iyer needs absolutely no introduction but for the sake of the newcomers in the scene we’ll list down a few of his many accomplishments in the past.  In the live arena, his second biggest live cash after APT Vietnam ME finish was in 2018 DPT Colossus SHR in Goa, where he came 4th for INR 10,90,000.

He has played across the globe from the poker capital Las Vegas to Macau, Manila and Australia in the east. His online record is staggering and needs an article of its own to list it down, winning various titles on all leading poker sites, including PokerBaazi. 2019 will prove to be a memorable year for Iyer in retrospect and such a great start to the year means the player is in top form and will be looking to carry it forward into the ongoing Aussie Millions, which he has confirmed to take part in, and for the rest of the year.

Yesterday’s Final Table had a couple of known regs who gave tough fight to Iyer in his race to bag his 3rd title this month. Vivek Dubey aka ‘Vivek25’ finished 5th for INR 61k. Sagar Choudhury aka ‘sagarpupul’ finished 8th for INR 31.5k. Keep reading GutshotMagazine.com for more tournament results, updates and general poker news from across the planet.