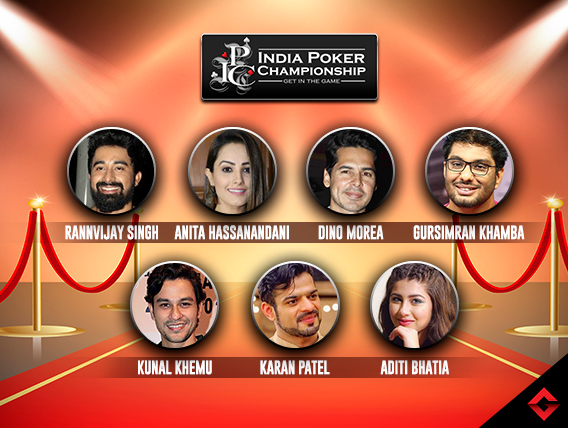 
The India Poker Championship (IPC) is less than a week away and once again, we’re expecting massive crowds to descend upon Goa’s Big Daddy Casino, which has been home to IPC since its return series last year in September. Poker enthusiasts, pros, recreational players, businessmen, friends, family and more will all be present at the venue between 14-19 January 2020!

IPC is India’s most prestigious and glamorous poker brand and there’s not going to be any shortage of Bollywood stars and other celebrities at the felts next week. In the past, we’ve seen several known names present at IPC and this time is not going to be any different.

Bollywood has always displayed its love for poker, with many of the biggest stars like Aamir Khan, Farhan Akhtar and Shahid Kapoor loving to play a game or two when they get the time. Next week, we expect to see many industry names like Rannvijay Singha, Kunal Khemu, Anita Hassanandani, Dino Morea and Harman Singha trying to get their hands on an IPC title. One of the most popular television celebrities in India, Rannvijay has been associated with poker since a couple of years now and was also present at the September 2019 series in Goa. Anita Hassanandani is also extremely enthusiastic about the game, once finishing 4th in a Spartan Millionaire tournament, while ‘Kalyug’ and ‘Traffic Signal’ star Kunal Khemu also enjoys a game from time to time. Actor/writer/producer Harman Singha is Rannvijay’s brother and it’ll be interesting to see if the multi-talented person knows his poker too, as he is set to make his IPC debut along with Dino Morea, who needs no introduction. The former model and actor has done plenty of hit movies like ‘Raaz’, ‘Gunaah’ and more. His recent involvement in the gaming industry saw him making a hefty investment in fantasy sports platform Livepools and now, he’ll battle with some of India’s top pros at the Big Daddy poker room! Actor, model, DJ, entrepreneur and poker player Siddhanth Kapoor will also be one of the contenders, having won quite a few titles online in the past as well!

Karan Patel has been in the television industry for 15 years and all of his experience will be put to the test as he tries to maintain a poker face at IPC Jan 2020. Having also done hit movies like Shootout at Wadala, Patel was recently in Star Plus’s Yeh Hai Mohabbatein which ran successfully for 6 years on TV. He’s not alone though. He’s bringing his co-stars from that show to IPC as Aditi Bhatia will also be present, who played his daughter in the same series. Another member of that daily soap family was Aly Gony, and he’s not going to miss the chance to be at the event either. Chetan Hansraj, Divya Agarwal, Varun Sood and others have also confirmed their presence at the poker festival in Goa, which promises a series guarantee of INR 5+ Crore!

Reality show stars to be put to the test!

Rannvijay’s Roadies has turned out to be one of the most popular reality shows in India over the years and we have quite a few personalities from there who will also be present at IPC. Shruti Sinha and Baseer Ali are two such entities who participated in Roadies, Splitsvilla as well as Ace of Space 2. Do you think they’ll be able to play their cards right here?!

In the build up to the IPC Jan 2020 series in Goa, the #AceThePokerFaceChallenge has been going viral on social networks with a number of players and celebrities all taking up the challenge wherein they’ve to keep a poker face while holding a full scoop of ice cream in their mouth for 10 seconds! Can you also ace the poker face challenge?

A number of other celebrities will also be participating including Gursimran Khamba and Mubeen Saudagar, both extremely successful comedians who will have to bluff their way through the tough fields expected at IPC. With these two on the tournament floor, we’re going to have some laughs too, amidst all the serious, long hours of play. Khamba was recently involved with Spartan Poker, together presenting a series of poker videos called ‘Around The Table’. Businessman and poker promoter Raj Kundra is also expected in Goa, having run a few poker businesses himself, the most successful being the Match IPL which completed Season 4 in Mumbai not too long ago.

The series will be prefaced with the IPC Awards which is scheduled to take place on 14th January 2020, and a number of these celebrities are expected to be present at the star-studded affair, which will felicitate all of the biggest achievers of the year in poker! For more updates on the upcoming India Poker Championship and the biggest names that will be present at the tables, stay tuned to GutshotMagazine.com!