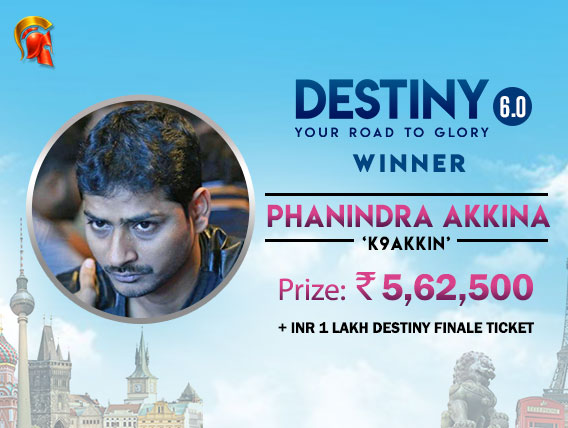 
The Spartan Poker is known for hosting some of the best online poker tournaments and promotions, and one of their signature tournaments is Destiny. Currently, the sixth edition of the Destiny series is underway, with the final winner being crowned last night. Now, ten winners have been declared in Destiny 6.0 and these winners will sit down to play for the INR 10 lakh Europe package in the Destiny SnG Finale on 27th October 2018.

The tournament has a buy-in of INR 5,500 and yesterday, 400 entries registered and 40 of them were eventually paid out, with a minimum cash prize of INR 15,000. Coming out on top of the field was none other than Phanindra Akkina aka ‘k9akkin’, who isn’t winning Destiny for the first time either.

He won the Destiny tournament in June as well, but there, he wasn’t able to win the international poker package. However, he’s got himself another chance to compete for the package and a trip to play poker in Europe. Yesterday, he outlasted the entire field to win INR 5,62,500 plus his INR 1 lakh ticket to the Destiny SnG Finale.

Akkina had built a chip lead of over 8:1 in heads-up and it was only a matter of time before he took home top honours. In the final hand, he shoved on the flop with 7c 9s and Harambe made the call with Ts 6s. The flop was 6h 7s 5s and Akkina had the higher pair and straight draw while Harambe held a flush draw.

8c on the turn and 3c on the river meant Akkina completed his straight while Harambe had to settle with just a pair of Sixes and the runner-up prize. Gutshot caught up with Akkina after this victory. He said, “I’m feeling very happy and very lucky to win Destiny twice on The Spartan Poker. I now have a second chance to take a shot at the 10-lakh live package.”