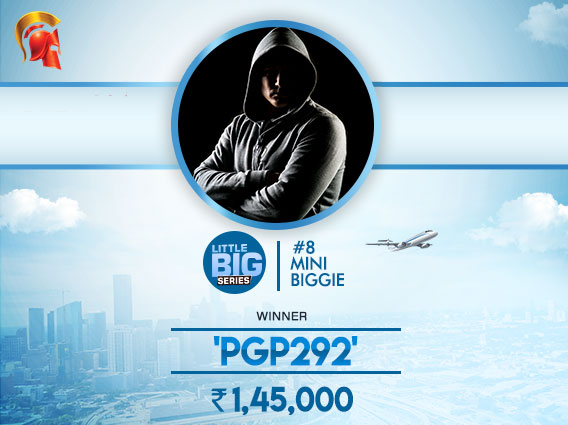 ‘Pgp292’ gets another title; biggest winner on LBS Day 2


This anonymous player who goes by the name ‘Pgp292’ has been having quite a good run on The Spartan Poker in recent times. In the last couple of months, he has shipped a few featured tournaments on Spartan, starting with the Mega Stack title during the September SSS edition, followed by a Triple Bubble victory a couple of weeks back and then the Daredevil title the very next day.

Here’s a summary of yesterday’s tournaments:

The stakes were slightly higher for the second tournament of the day. 176 entries meant that the guarantee was passed, and a new prize pool of INR 66,100 was created, which was distributed among the top 24 players with a minimum cash of INR 661. Reaching heads-up was Vaibhav Agrawal aka ‘petbot’ and Chandan Dilawar aka ‘JonTCD’, both previous winners on Spartan. Agrawal shipped an SSS Event in September this year and Dilawar was September’s Millionaire on Spartan. However, it was Agrawal who took down the title yesterday, winning INR 15,203 and Dilawar finished second for INR 10,212.

This was the third tournament of the day but the first freezeout tournament, with the same guarantee as the previous tournament. 188 entries registered and from them, the top 24 were paid out with a min-cash of INR 600. Coming out on top of this field was a player who goes by the name ‘Agneepath’, who was rewarded with the top prize of INR 13,800. Finishing second was ‘zabar808’ who won INR 9,270. The tournament ended when Agneepath’s Jacks and Tens beat his opponent’s Jacks and Sixes in the final hand.

This was the biggest tournament of the November LBS series thus far, with a strong field of 244 entries taking part and the top 25 places from them being paid out (min-cash INR 5,500). As mentioned above, ‘Pgp292’ was victorious here, shipping the Mini Biggie and taking home the top prize of INR 1,45,000 after beating ‘Ande ka funda’ in heads-up, who was given the second-place prize of INR 78,750. Pgp292 has been on a roll in recent weeks and he continued his winning streak here after he completed a Ten to Ace straight on the river in the final hand.