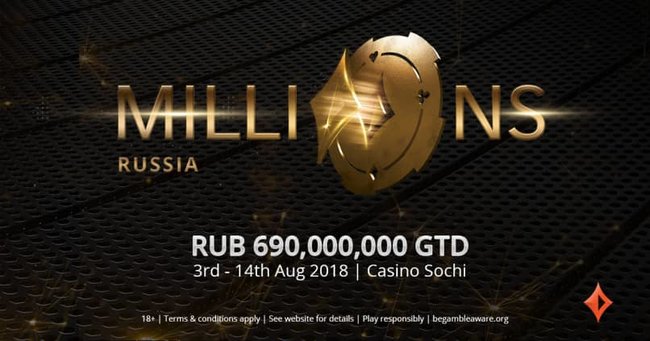 In the last partypoker LIVE MILLIONS Russia, 999 entries were recorded, and Aleksandr Gofman walked away with the top prize of a million dollars, while Spain’s David Laka Calzada finished in second for $600k. The series will take place at Casino Sochi between 3 and 14 August 2018.

The series is advertising RUB 690 million (~ $10.8 million) in guaranteed prizes, along with an RUB 300 million (~ $4.8 million) GTD prize pool in the Main Event. Last year, the $5 million guarantee was missed slightly but it’s expected to be covered this time around, as Sochi has become a more popular poker location over the months.

Local boy Arseniy Karmatskiy won the EPT Sochi Main Event which was hosted here in March this here and he, along with a lot of other Russian players, will be looking to rake in some big bucks again. This year’s Main Event will prove to be a very unique one, with three days of live starting flights and one online day.

partypoker also recently launched their own online currency called PP LIVE Dollars, which players can win online and use it to pay for play, travel or accommodation across various partypoker LIVE series. The first 100 players to buy-in to the Sochi Main Event using PP LIVE Dollars will automatically be enrolled into a competition wherein the last man standing wins $100k in addition to his/her tournament winnings.

Keep reading GutshotMagazine.com for updates on live and online poker from around the world.