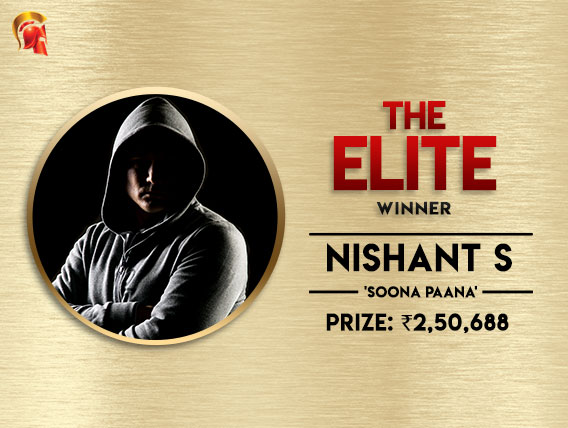 
One of the clear favourites for players on their weekend grind is the Elite tournament which takes place every Friday evening at The Spartan Poker. Last night’s Elite winner was Nishant S a.k.a ‘Soona Paana’ who outlasted 112 players to claim victory in this top value event.

While the Elite has a guaranteed prizepool of INR 15 Lakh, this 6-max re-entry tournament eventually ended up with INR 16,40,000 in the prizepool as a result of its 112 participants. This INR 11,000 buyin tournament would pay out 15 places with min cash being INR 29,520. Some notables who made the final table included ‘bangbang99’, ‘strippoker’ and ‘instrumental’.

With close to 12 lakhs in play for the top five places, the remaining survivors decided to make a deal where they would split the prizwpool on the basis of an ICM deal. Along with the aforementioned instrumental, the four other players who made a deal were homeless on Wi-Fi, Arjun one and the top two positions were claimed by Soona Paana and Arsh Grover a.k.a BigggTymeR.

As there was a deal done between the final five, effectively the last hand after an extended period of 5-way action was the last hand or rather the last elimination which took place in this manner. ‘trickpoker’ made an initial raise before the flop to 18,000 holding pocket Jacks. Soona Paana reraised him and went all-in holding Big Slick (As Ks). The board was kind to Soona Panna with 3s Kc 9s Qs Qd giving a flush to Soona Paana and knocking out the pocket Jacks and Queens two pair of trickpoker in sixth place for a score of INR 96,760.

Here is what the top five payouts in this tournament look like with Sohna Panna taking the title by virtue of having the biggest stack when the deal was done:-