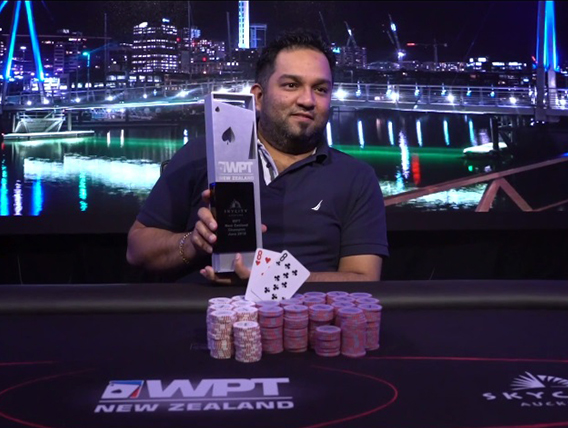 
Nauv Kashyap topped a record field to win the inaugural WPT New Zealand Main Event, taking home NZ$169,200 in first-place prize money. The 360 entries generated at SkyCity Auckland proved the largest main event in New Zealand history. “Obviously I ran very well at the final table, so I’m very happy with the way it came out, but you have to take the luck when it comes,” Kashyap, an Australian poker player and dentist, said right after the victory.

Kashyap came into the final day with the chip lead, but he faced some adversity early in the day before dropping the hammer in the late stages at the final table. “I got lucky in a lot of ways,” Kashyap said. “When I was bluffing, I wasn’t called. When I had it, they happened to call. You can’t really change the way the cards go, and it worked out well.” When he was asked by WPT Anchor Lynn Gilmartin what his celebration plans were, Kashyap offered this response: “Well, I’ve got my wife and kids upstairs. My wife can’t be here since she has to look after the kids. She has been following the live stream so I will get to have some drinks with her to celebrate.”

The final day saw 16 players return before the final table of nine was set just before 4 p.m. local time. The final table then kicked off with Nic Southorn scoring a double up before Eden Smith was the first player to fall in ninth place. Daniel Neilson was out next in eighth place, and then the second time Southorn was all in he couldn’t survive so Southorn was eliminated in seventh place. This made Jack Efaraimo, “the godfather of New Zealand poker,” the WPT New Zealand Player of the Series champion. Zac Metin scored a double up after the players returned from their first break of the day. He moved all in once again a short time later, but Metin’s luck ran out in sixth place. Before the second break in play, Efaraimo was able to score a double up thanks to his namesake jacks, and then Anthony Inns was lost in fifth place.

The eliminations kept rolling after the next break, as Kelvin Li left the tournament in fourth place and then Sosia Jiang took her leave in third place. This set up a final match between Nauv Kashyap, who held a massive stack with 7.9 million over the 1.1 million of Efaraimo. The final match did not last long. On the final hand, Efaraimo was all in preflop for just over a million, and Kashyap had him covered on the button. The two players then flipped over their cards to reveal that Kashyap had the 8c8h and Efaraimo the Ad8d. The board ran out Qc4c3d7h3c to give Kashyap the victory. Efaraimo was eliminated in second place, good for NZ$108,000, and Kashyap won the pot and the tournament in dominant fashion during the closing stages of play. Kashyap took home the top prize worth $169,200, and the WPT title.