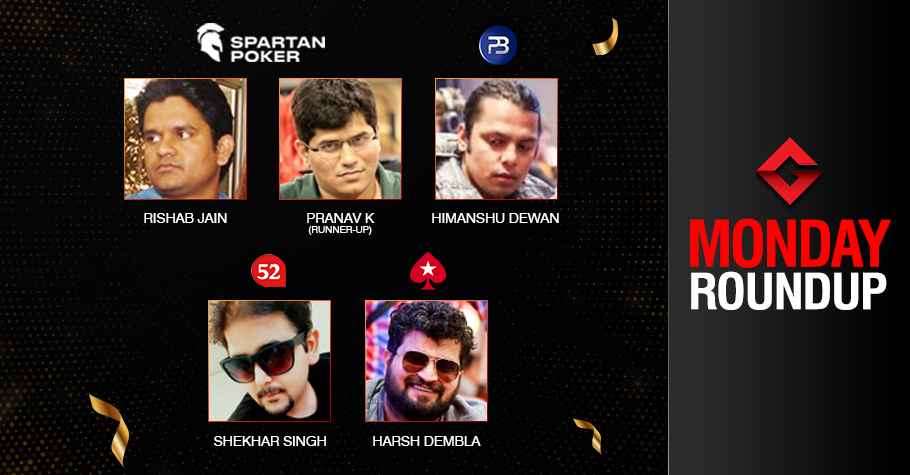 
Monday was truly a day to remember because India won its first WSOP gold bracelet of 2020. The action-packed day wrapped up with a record breaking second place finish by Suraj Mishra in Event #63. The domestic felts were also lit up with flagship tourneys and without further ado, let’s take a quick recap of what went down yesterday.

Another marquee event on Spartan Poker The Flash INR 6 Lakh GTD was hosted yesterday night. A total of 548 runners took to the field after chipping in INR 1,100. Rishab Jain aka ‘rishabjain1983’ outran the competition and beat his heads-up rival ‘yeaces’ to clinch to the winner’s prize money. The top 55 spots were assured a minimum payout of INR 2,940.

Headlining the Monday schedule at PokerBaazi was The Bout INR 10 Lakh GTD. A total of 342 entries lined up to contend for the top prize. In the end, it was Prateek Singh aka ‘khotasikka’ who emerged triumphant and pocketed INR 2.1 Lakh in top prize, after he bested ‘DEEPAKALLIN’ heads-up. The mystery player earned INR 1.47 Lakh. Sajjan Barnwal aka ‘TheTeacher’ ended up in the 3rd place for INR 94,500, Ankur Sehgal aka ‘Stonecold’ followed next, securing INR 70,000 and Gautam Rohilla aka ‘M8a7’ bagged INR 52,500.

PokerBaazi‘s August edition of Baazi Grinder Series comprises of 35 tournaments spread across 7 days promising INR 45+ Lakh. Yesterday’s main attraction was Grinders #4 Monday MegaStack INR 2 Lakh GTD pulling in 85 entries out of which only the top 9 players finished ITM. Conquering the field was Himanshu Dewan aka ‘ISquirtBullets’ who knocked out ‘Hades’ in heads-up for INR 60,000. The latter banked INR 42,000 for runner-up finish.

PokerStars India’s Battle Royale INR 6 Lakh GTD kicked off yesterday at 7:30 pm. For a buy-in INR 2,750, a total of 172 runners pounced on the field hoping to grab the Monday title. The top 27 walked away with INR 4,491 min-cash. After the dust had settled, site regular Harsh Dembla aka ‘kakori kabab’ emerged victorious for INR 77,152 in prize money. Dembla beat ‘Nitin&AMIT9999’ heads-up who added INR 58,360 to his poker wallet for runner-up finish.