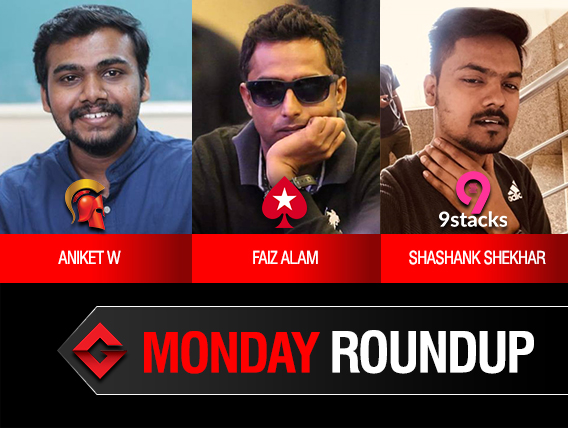 
Undeniably, Sunday hit the coasts of online felts with massive success! However, given that Monday is quite busy and relatively slower at pace, it did not prevent the players from testing and showcasing their poker skills leading to ignite the circuit with power-packed action. So, let’s have a quick look at the Monday majors…

After a weeklong extravaganza of SSS on Spartan Poker, the daily feature ReCharge INR 12 Lakhs GTD made its Monday run with 658 unique players entering for a buy-in of INR 2,200. As the tournament progressed, the guarantee broke to generate a higher prize pool of INR 13.16 Lakhs and the top players profited from the same. A prominent face in the industry Aniket W aka ‘Anteman’ who trounced the field and defeated Anmol Mehta aka ‘Anzzzzz’ in heads-up to capture the title and winner’s prize money.

In level 52, Aniket had a chip lead of 4 million, holding Ad 3h up against Mehta with Jh Qc. Pre-flop saw the entire stack of the latter in the middle and a call from the former. Aniket found his pair on flop 6c Ac 8s. The turn 5h proved empty for Mehta, however, with Qd on the river, Mehta was railed out by Aniket’s higher pair of Aces, thus, shipping the entire tournament.

Dominating a field of 229 players, online crusher Rahul Gupta aka ‘Clearsky’ took away The Bout INR 10 Lakhs GTD title on PokerBaazi last night. For a buy-in of INR 4,400, a pretty good field was observed, and the top players strolled out with a slice from the prize pool. Gupta defeated Guru Prasad Gupta aka ‘fish_calling’ in heads-up to strengthen his bankroll, adding healthy prize money of INR 2.35 Lakhs. However, the runner-up managed to secure INR 1.65 Lakhs.

The chip graph on PokerStars Monday Hustle INR 6 Lakhs GTD evidently shows that leading online grinder Faiz Alam playing under the username ‘LFGgggg’ finished in the first place. Alam up against Rajat Sharma aka ‘sharabikebabi’ ended the tournament after both players struck a heads-up deal and with Alam’s impressive stack took home the winner’s prize money of INR 1.21 Lakhs. Sharma managed to secure INR 90,435 for resting in the runner-up position.

The standout performance was given by Shashank Shekhar aka ‘biharibhaia’ who beat Anuj Yadav aka ‘brockLesnar95’ in heads-up to capture the winner’s prize money of INR 65,000 and the title on 9stacks’s StackUp INR 2.5 Lakhs GTD. Yadav walked away bagging INR 45,000 for resting in the runner-up position.

The top players finishing in the money include Karan Sawhney aka ‘chickentikka’ (6th), Nitin Ranka aka ‘ElMonje’ (12th), Anuj Manocha aka ‘Desijuari’ (19th). For latest updates on poker news and tournaments around the world, keep reading GutshotMagazine.com and stay tuned!