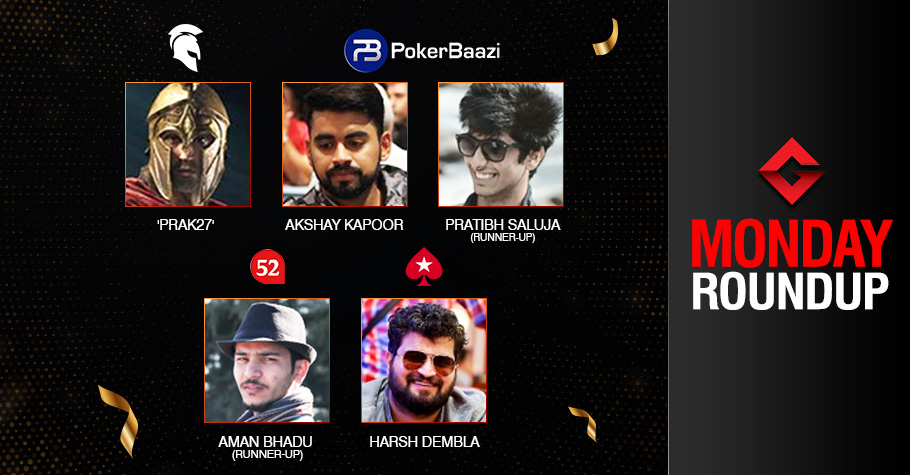 
On the heels of a memorable Sunday, yesterday was relatively slow-paced but still saw some of the big names of the circuit participating in the flagship tourneys. Let us give you a quick recap of how things panned out.

It was Akshay Kapoor aka ‘CallmeAK’ who was crowned the champion in PokerBaazi’s Monday MegaStack INR 2 Lakhs GTD last night. Kapoor knocked out ‘gtogeek’ in heads-up and the latter took home INR 42,000 for his efforts. The entire tourney drew 77 entries and the winner banked the biggest slice of the final prize pool, walking out with the title along with INR 60,000 in prize money.

Headlining the Monday schedule at PokerBaazi was INR 10 Lakhs GTD The Bout. A total of 356 entries lined up to contend for the first prize. In the end, it was Karan Malhotra aka ‘gogikaran’ who sealed the title, along with INR 2.10 Lakhs in prize money, after he bested site regular Pratibh Saluja aka ‘pratibhsaluja’ in heads-up. Saluja banked INR 1.47 Lakhs for his second-place finish. Ritwik Khanna aka ‘Ritwikkhanna’ finished 3rd for INR 94,500 followed by Banmanlang Warr Lyndem aka ‘bml2012’ who earned INR 70,000.

PokerStars India’s Battle Royale INR 6 Lakhs GTD kicked off yesterday at 7:30 pm. For a buy-in INR 2,750, a total of 211 runners joined the field hoping to grab the Monday title. The top 35 walked away with INR 3,220 min-cash. After the dust had settled, site regular Harsh Dembla aka ‘kakori kabab’ emerged victorious for INR 66,755 in prize money. Dembla beat Vishal Madan aka ‘DeadGrinder1’ heads-up who added INR 48,639 to his poker wallet for runner-up finish.