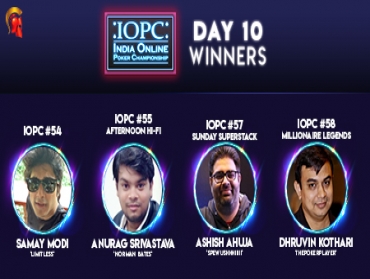 
The India Online Poker Championship (IOPC) promised INR 16+ Crores as the series guarantee. And we are already halfway through it and yesterday marked the end of another set of events with Millionaire Legends being the star-studded tournament of the day! Besides, Sunday SuperStack and Big Daddy also observed a surge of players walking out with their hefty bundles. And here is a complete summary of IOPC Day 10…

The day began with 700 entrants pouncing on the table after paying the smallest buy-in of INR 550. Before the tournament saw its end, the prize pool was divided among the top 47 places with a min-cash of INR 1,995. It was ‘hunter0206’ who was announced as the official winner after the players struck a three-way deal. Carrying the largest stack of 1.91 million ‘hunter0206’ claimed the day. ‘retaliate’ followed the champion in the second position and Saumil Krishnani aka ‘Indianavatar’ in the third place.

The buy-in slightly increased to INR 660 noting 723 players registering in the second tournament of the day which took the prize pool to INR 4.33 Lakhs. Out of which the top 55 places walked out with their min-cash. Grabbing his second IOPC title after already taking down Event #49 Afternoon Hi-Fi on IOPC Day 9 was Samay Modi aka ‘Limitless’. The tournament came to a standstill after the players struck a heads-up deal and with Modi carrying the largest stack of 2.65 million sent ‘Rayolsimha’ in the runner-up position.

Logging a decent field of 479 entrants for a bigger buy-in of INR 1,100. The third event of the day also crossed the assured amount to become INR 4.79 Lakhs in prize pool which was distributed among the top 31 places receiving a min-cash of INR 4,215. Online grinder Anurag Srivastava aka ‘Norman Bates’ ended up outlasting Sanish Chhabra aka ‘Sanish21’ in heads-up. In level 42, Chhabra shoved with Jh Kc and a call from Srivastava holding Td Ad. The board ran 3c 2c 8s 9s 9d and Srivastava was fortunate to have Ace kicker which brought him his IOPC title!

INR 2 Crores is what the Millionaire Legends exhibited being the highest buy-in tournament. Day 1C pulled out a total of 255 entries but in no time the field whittled down to 69 survivors with Jai Saha aka ‘jksisme’ accumulating the largest stack of 4.94 million and the WSOP bracelet winner Nikita Luther finishing second in the chip lead with 3.30 million chips. A total of 143 hopefuls along with 172 stacks progressed to Day 2 with the overall chip in-charge Abhineet Jain from Day 1A.

Sunday SuperStack, a featured tournament was the second biggest major attraction on Spartan Poker. Drawing a massive field of 950 players with each one paying INR 5,500. The prize pool was smashed to become INR 47.50 Lakhs, well-distributed among the top 87 places, receiving a min-cash of INR 14,725. After his victory in the 2020 BPT Kick Off, Ashish Ahuja conquered the field to grab the prestigious title last night. Ahuja who is well-known as ‘Spewushhhiiiii’ was up against ‘BuddyLove’ in heads-up who finally settled in second place after the players ended the tournament with a heads-up deal.

The day began with Abhineet Jain aka ‘bankelal’ leading 143 players to Day 2. The three-day multi-flight tournament lured a total of 980 entrants for a buy-in of INR 27,500. Ultimately crushing the displayed guarantee to INR 2.45 Crore and this massive amount was finally shared among the top 145 places who strolled out with their INR 36,750 min-cash. The January version’s millionaire Dhruvin Kothari aka ‘thepokerplayer’, chip leader on Day 1B occupied the first position in the list after the players struck a 5-way deal.  Abhineet Jain aka ‘bankelal13’ (2nd), Arsh Grover aka ‘BigggTymeR’ (3rd), Nikita Luther aka ‘Pterodactyl’ (4th), and Anant Purohit aka ‘Pro’ (5th) were also a part of the deal.

To read more upon the Millionaire Legends FT, click here.

IOPC Day 10 ended with the final tournament that fetched 956 entries for a buy-in of INR 1,650. This number surpassed the promised amount to become INR 14.34 Lakhs, well distributed among the top 79 finishers for a min-cash of INR 4,875. It was an anonymous but online reg ‘CrownUpJr’ who took down the last event sending ‘pinnug1’ to the runner-up position after the player settled for a heads-up deal.

Check out the leaderboard on IOPC Day 10:

For more updates on the ongoing India Online Poker Championship (IOPC) and other tournaments from India and across the world, stay tuned to GutshotMagazine.com.